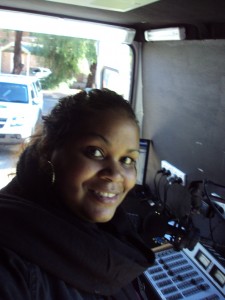 Umeewarra Media’s Dwaylene Brown is a woman who has found a passion in broadcasting and for spreading the word about the important role the Aboriginal community plays, and the issues they face in today’s society.

This proud Aboriginal woman, originally from Coober Pedy, has been broadcasting with Umeewarra Media for the past five years but her interest in broadcasting began from a much younger age.

“I started volunteering at Dusty Radio in Coober Pedy with my sister doing a mixed show, then I moved down to Port Augusta and decided to apply for Umeewarra, and fell in love with broadcasting,” Dwaylene says.

From 1pm– 4pm every day she hosts the ‘Culture Show’, a program broadcasting information about cultural events, Aboriginal music, and discussing issues and events happening in the local community.

“We try to get more Aboriginal people to talk more about our culture and hopefully get more of our mob to speak on air about events that are happening. We also interview some up and coming Aboriginal performers,” she says.

“It’s really important to get our culture out there.”

Umeewarra Media were recently involved in NAIDOC events with live broadcasts from places such as Davenport, and this week of celebration is very close to Dwaylene’s heart.

“It’s about our culture, about recognising all of the achievements our people have made,” she says.

“Allowing them to get awards for the great achievements they’ve accomplished throughout the year.It’s a great week to celebrate with Aboriginal people and non-Aboriginal people.”

Umeewarra Media is the only Aboriginal radio station in South Australia and began broadcasting in Port Augusta in 1987.

They have an Aboriginal Board of Management that ensures they have community ownership of their programming. Their aim is to promote reconciliation through sharing cultural information and breaking down barriers.

Dwaylene has interviewed people like singers and cousins Casey and Emma Donovan and has come a long way since volunteering in Coober Pedy.

She has plans for the future that involve staying with Umeewarra and doing what she loves best.

“Hopefully I’ll still be here at Umeewarra Broadcasting,” she says.