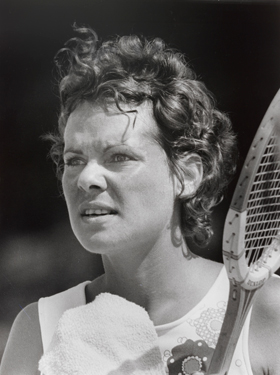 Cathy Freeman, Marcia Langton and Evonne Goolagong-Cawley are part of a new exhibition in Canberra celebrating some of the extraordinary achievements made by Australian women over the past century. The exhibition, First Ladies: Significant Australian Women 1913-2013, is now on at the National Portrait Gallery in Canberra.

The 21 portraits are of women who have had a profound influence on women’s lives in Australia – including many who have achieved noteworthy firsts during the 20th century, such as Cathy Freeman and Evonne Goolagong-Cawley. Curator of the exhibition Jo Gilmour, says it is relatively small exhibition drawn from the larger National Portrait Gallery’s collection to coincide with Canberra’s centenary. “Their portraits map the milestones accomplished by Australian women across diverse fields of endeavour, including politics, activism, academia, the arts, literature, sport, science, business and medicine, and take in the stories of household names as well as unknown and unsung heroines,” Jo says.

The exhibition encompasses paintings, drawings, sculpture and photography, and the portraits in the First Ladies exhibition represent each of the decades between 1913 and 2013. “It creates a vivid, visual timeline of Australian women in the 20th century,” Jo says. Jo says the portrait of Cathy Freeman comes from 1995 and is by Montalbetti and Campbell. Cathy is celebrated for her wins as a sprinter including the Australian women’s 4 x 100m relay team which took out the Gold Medal at the Commonwealth Games in Auckland, making her the first Aboriginal runner to win a Commonwealth Gold Medal. She won two more in 1994, with victories in the 200m and 400m. “She was also the first Aboriginal track and field athlete to represent Australia at the Olympic Games. She won a silver medal in the 400m in Atlanta in 1996 and she was ranked first in the world in her signature event, the 400m, in which she won back-to-back World Championships in 1997 and 1999, and, memorably, the Olympic gold medal in front of her home crowd in Sydney in 2000,” Jo says. “Cathy was also the first person to be named both Young Australian of the Year (in 1990) and Australian of the Year (in 1998).”

Jo says the gelatin silver photograph of Evonne Goolagong Cawley in the exhibition comes from 1973, and is by Ern McQuillan. “Evonne’s achievements as a tennis player are celebrated in the exhibition, including her first grand slam victories came in 1971, when she won the French and Wimbledon singles titles, defeating her childhood idol, Margaret Court, for the Wimbledon crown,” Jo says. “She also won every mainland state title and the Australian singles and doubles titles from 1974 to 1976. She played in the Wimbledon finals of 1973, 1974, 1975 and 1976, prompting English journalists to dub her the ‘Sunshine Supergirl’.

Evonne also played in her fifth Wimbledon final in 1980 and by defeating Chris Evert became the first mother to win a Wimbledon singles title since 1914.

Jo says the portrait of Marcia Langton is from 1982 and is by Juno Gemes. “Marcia Langton AM is celebrated in the exhibition as a major Australian anthropologist and scholar in contemporary issues in Indigenous affairs. Marcia was active in the women’s and Aboriginal rights movements during the 1970s,” Jo says. “Later she worked for organisations including the Northern Territory’s Central Land Council and Aboriginal Issues Unit, and with the Cape York Land Council was involved in the landmark native title claim made by the Wik peoples in the 1990s. “She was also Ranger Professor of Aboriginal and Torres Strait Islander Studies at Charles Darwin University from 1995 to 2000, when she was appointed Foundation Chair and Professor of Australian Indigenous Studies at the University of Melbourne.” First ladies: Significant Australian women 1913 -2013 is on at the National Portrait Gallery until 16 June, 2013.