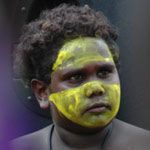 The annual Garma Festival allows black and white to come together to share knowledge.

“A garma is a sort of place ” of rich resources for many people, this garma thing. For all Yolngu [people]. Like this, all Yolngu always used to come to this thing garma, coming together, all different groups.” Gunygulu Yunupingu

The Garma Festival, held each year at Gulkula in North Eastern Arnhem Land, is aimed at sharing the Yolgnu knowledge and culture with non-Indigenous Australians and overseas visitors.

Garma implies many things for Yolngu, as a practice and as a place. Garma happens when people with different ideas and values come together and negotiate knowledge in a respectful learning environment.

The festival, which has been running since 1998, is designed to encourage the practice, preservation and maintenance of traditional dance, song (manikay), art (miny’tji) and ceremony (bunggul), on Yolngu lands.

Forums were also held to discuss such issues as economic development, tourism, land rights and art.

More than 1500 people from all over the world attended this year’s Garma Festival, which is organised by the Yothu Yindi Foundation. For the first three days of the festival, unseasonable heavy rains battered the festival site, but even soggy tents and mud couldn’t dampen the enthusiasm of those in attendance.

There were plenty of famous faces to be seen amongst the crowds, including former Midnight Oil frontman Peter Garret, actor Jack Thompson and members of Yothu Yindi. Visitors came from as far away as Italy, Japan and America.

Deputy Chair and Secretary of the Yothu Yindi Foundation, Mandawuy Yunupingu, has this to say about Garma:

“We’re living in fluid times, trying to discover in more profound ways what it is to be Australian. I think the vast majority of Australians would agree that Aboriginal Australians have a special contribution to make to that. But there seems to be a problem. I think most non-Aboriginal Australian accept that there is a deep intellectual strength to Aboriginal knowledge, but they seem to think of it as a mystery. I hope we are less of a mystery now.”