With a career spanning over 25 years, Wayne Quilliam is regarded as one of Australia’s most prolific and respected photographers here and overseas for his work capturing Aboriginal and Torres Strait Islander people and culture. He travels the globe with over 20 exhibitions a year and this month took his photographs of Australia’s National Apology to the Stolen Generations in 2008 to New York. 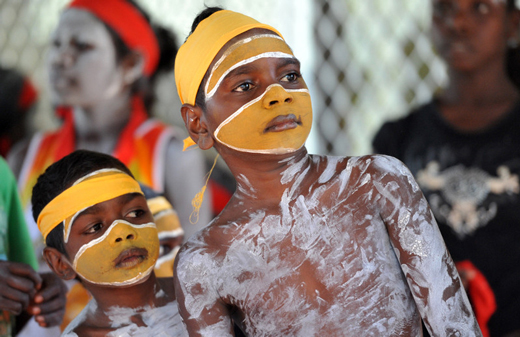 Wayne was in America as part of G’Day USA in January of this year – an annual program designed to showcase Australian business capabilities in the USA, with the likes of Paul Hogan and Hugh Jackman. It was here that he was asked by the Australia’s Ambassador to the US, Kim Beazley to bring his Sorry: More Than Just a Word exhibition to the Big Apple.

“We had some of the most influential people in the art industry come along to the exhibition who were astounded at the diversity of Indigenous culture we have in this country and that I’d captured it through modern technology, through photography,” says Wayne.

His exhibition was so well received, as it was in Australia with over 250,000 people visiting it in Parliament House, that he is wanted back in the States. “We had the Consul General saying that he wanted to bring me back and explore and work with the Indigenous people in North America. To be asked back so quickly, literally within a week, was fantastic. Unfortunately, I just have too many other commitments on at the moment.”

According to Wayne, Indigenous cultures all over the world share many similarities with our own and he has captured this through his work. “Our spirituality and connection to country doesn’t even have to be spoken. I’m up in the Andes in Bolivia for instance working with an Indigenous group there that have restrictions on health and education, and English is not something within their grasp. It’s like going out to some of our more remote communities,” he says.

“The way that Indigenous people look after family and country is just so similar. How proud of family and culture they are, is exactly the same where ever I go. That’s how I try to capture it; I don’t try to set anything up, I capture it as it happens. It gives me a beautiful sense of how I’m in such an honoured position to be able to do this.”

He has worked with people from all walks of life and is pioneering a new type of Aboriginal art in a way that has never been done before. “I work with traditional owners, contemporary dancers, regional areas all over the country and because my job for the past 20 odd years has been interacting with our communities on a daily basis, I’m documenting our culture in a positive, funny, uplifting light,” Wayne explains.

“In my opinion, in the past a lot of exhibitions that have gone overseas have been based around the deprivation of liberty and the hardships that a lot of our people face. They get a very biased opinion of who we are as a culture. “I’d say I’m different to many Aboriginal photographers because I work in communities all over the country, generally a lot of our photographers work in a particular area. “It’s a lot of hard work but a hell of a lot of fun. You’ll be sleeping on a dry river bed one day and in a 5 star motel in LA the next.”

Growing up in the 70’s Wayne wasn’t taught his Aboriginal culture in school – they were taught that the last Aboriginal person was Truganini and that “the white man had come in and wiped out black fellas.”

This only made Wayne embrace his true culture more. “I have this amazing feeling in my being as an Aboriginal man, I feel so connected to other countrymen, the earth, and when I’m out at country I feel at home. I never grew up with any of this, it wasn’t a learnt thing, I’ve always considered myself as a sponge, and I’ve absorbed everything through my experiences. “Aboriginality can’t be taught to you, it’s who you are. There’s no part Aboriginal, no bit, it’s who I am; who I identify myself as.”

Out of all the awards that Wayne has won including a Human Rights award, he cites NAIDOC’s Artist of the Year as the closest to his heart. “Whatever I do from here on in, it won’t match the NAIDOC award, unless one day I get Elder of the Year but hopefully that’s 50 years away,” he jokes. “I didn’t think there was a hope in hell that I’d ever win such a prestigious award. It was an unexplainable feeling when I won it.”

All artists have some form of inspiration and for Wayne it is his family and the joy his work brings people all over the world. “The joy I see when I come home and she looks at what I’ve been doing and teaching her to understand her culture through my photography inspires me to do more,” he says. “It fills me with joy that people come along for the journey when I do what I do and it’s just unexplainable, it’s just perfect. “It just grows as a passion, I love my work so much, every day is a different day and it’s just beautiful,” he says.