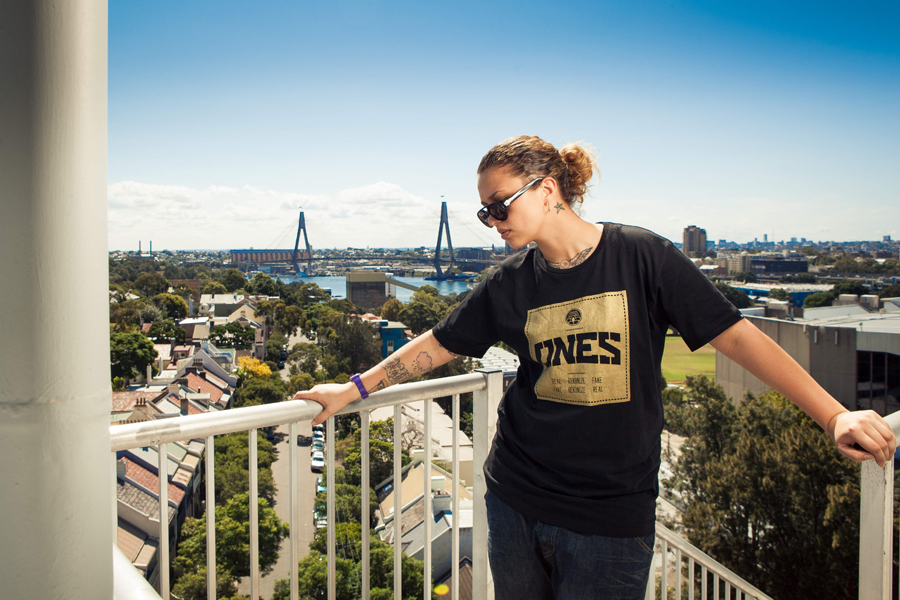 Sydney based Aboriginal/Fijian rapper, Sky‘High, was named Best Female MC at the 2012 Ozhiphop.com awards and was also a 2012 Deadly Award nominee. Dubbed the ‘gutter queen’ by her fans, she describes her lyrics as raw and real, and spoke to InVibe and Jailbreak about her music and obstacles growing up on Sydney’s tougher streets.

Jailbreak: Sky’High’s been stirring up a storm in the Aboriginal music industry recently. After getting into a bit of trouble in her younger years, she says the turning point for her was the moment she thought she’d lost her mother.

Sky’High: Seeing her unconscious in my arms had the biggest impact on me. Seeing my mum unconscious from an overdose and thinking how everything could go, just like that. I wasn’t thinking of myself. I was thinking who she was leaving behind. She has other kids and their lives could be ruined by her selfishness, you know? When I saw my mother I thought, oh man, what am I going to do with my brothers? What are they going to end up like? Will they just continue the same cycle? So yeah, that had the biggest impact on my behaviour. People who take drugs don’t realise the impact they have on those around them and on their own lives as well. It’s being selfish, drugs are selfish.

JB: How did you get into music?

SH: My Mum had a big collection of music when I was little. Memphis rap, sort of gangster rap, and that’s when I first heard 36 Mafia’s ‘Baby Mamma’ and from there on, that was it.

JB: So your Mum was into hip hop?

JB: What impact did that have on you?

SH: My brother, he went in the opposite direction to that. He’s anti-drugs and a total health freak. I think you can go either one way or the other I guess. I wrote a song called ‘Let’s Just’ for my brother, it’s about having fun without alcohol or drugs, like, let’s go all out but let’s not do drugs, let’s not drink., let’s not get high. I didn’t ever think I would write a song about that to be quite honest. JB: What impact did drugs and alcohol have on you?

SH: Depression, negativity. I felt sorry for myself a lot. So if I don’t want my younger brother to take drugs then I don’t take them. Live by example! Who am I to say don’t drink when I’m drinking? I can’t do that. I can’t tell someone not to take drugs if I’m taking them.

JB: How do you feel about your Aboriginality?

SH: My Mum’s part Fijian and her Dad’s from the Stolen Generations. He’s Wiradjuri. I was really ignorant to the fact I was part Koori. Just recently I‘ve been exploring who I am. I’m learning more every day. It was hard to break away from rapping with my friends and then rapping in front of people I didn’t know. Back then I didn’t understand why. It’s because of the word ‘shame’. Everyone’s like, ‘well, how do you get over this feeling of shame?’ You just got to knock down that wall of shame! Its crazy how many young kids, adults even, use that word ‘shame’. In the music industry you never hear it. The best way is just to be myself. Best way to learn is to lead by example.”

JB: Who inspires you?

SH: I’ve got four brothers and my youngest brother’s just finished year 12. He’s helped me way more than he’ll ever know. Watching him and everything he’s accomplished has inspired me. He’s gone alright, you know? I mean, he’s like the only normal thing in my life really. I actually wanted to finish school. My attendance was the problem. I still can.

JB: Do you have a message for people inside?