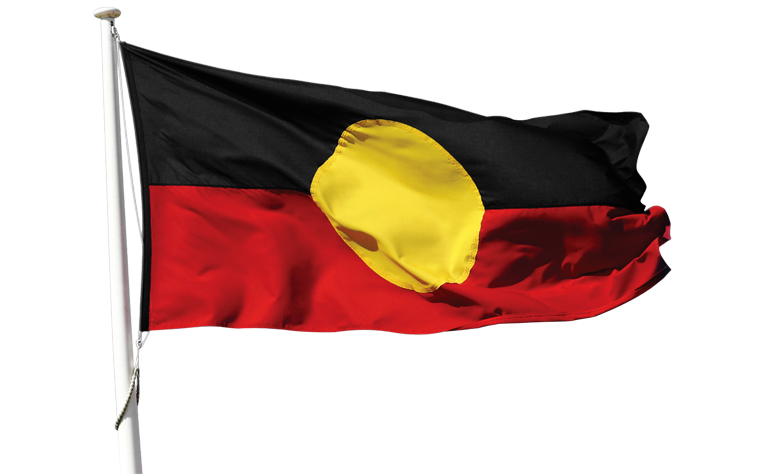 The designer of the Aboriginal flag Harold Thomas has joined the chorus of people asking for help to find the original flag, which was first flown in a demonstration in Adelaide’s Victoria Square in 1971.

If it is found, Harold says the flag should be placed in the Australian National Museum in Canberra. The Aboriginal flag has come to symbolise the hopes and dreams of Aboriginal people everywhere and to find the original flag that Harold made would be like finding a long lost national treasure, he says.

Harold says he has no idea where the original flag could be – except he has an intuition it may be somewhere in Redfern. “It could be anywhere between Perth to Brisbane, to Darwin to Hobart. I am not really worried, but it would be great if someone brings it out of the cobwebs and we can go from there,” Harold says. “You never know – it may turn up. Someone rang me up about it from NITV – and I said to them that I thought it may have ended up at Redfern. If it did turn up there, it would be a great story wouldn’t it? I mean we created our modern politics from Redfern.”

Harold says if the original flag does turn up, it should be put in the National Museum. “It has become an icon, a relic of political significance for Aboriginal people. So maybe it should go in the section of the National Museum regarding Aboriginal people – yes – maybe that is the place for it to go – so it gets protected for all time and it will create interest for the future. The flag is relevant for the modern political history of our Aboriginal people and for general information of any person in this country,” he says. “The flag was made at the time when we needed one. It was and is about Aboriginal unity and identity and pride – these are basic things, which are incalculable. You can’t put a price on that and people are proud of that flag. It has some magnificent, striking colours and those colours help give pride and confidence to thousands of Aboriginal people – in and out of jail.”

The symbolic meaning of the flag colours are: black – representing the Aboriginal people of Australia, red – representing the red earth, the red ochre and a spiritual relation to the land, and yellow – representing the Sun, the giver of life and protector. These days, Harold he is keeping himself busy from his home near Darwin – mainly as a painter of the landscape. His oils, acrylics and watercolours are highly collectable and are represented in the Territory Colours Gallery in Darwin. He has a deep love for the country and its wildlife and presents it in his unique and timeless way. “I am still being a creative artist and painting as I have always painted – from my art school days, which is back before 1965. I have created a lot of artworks and have given a lot of pleasure to myself and to those who like my art – but the flag stands on top of all that doesn’t it?” he says.

He says if he had the chance to live in the 60s again he would do it all over again. “That was a great time. Yes the 60’s and early 70s were great because that was a changing time for everybody – in England and Australia and throughout the world. It was a time when young people actually changed the world,” he says. Though in his mid-60’s now, Harold is still very active as a painter and family man. He is working on a major oil painting for all Australians, based on an historical event in the NT that might be unveiled this year.

Harold was born in Alice Springs and is descended from the Luritja people of Central Australia. As a young boy, he was taken from his family and placed at St John’s Hostel. At the age of seven he was sent to South Australia’s St Frances House, an Anglican institution for Aboriginal boys. At the age of 11, he was fostered to a white family. At school he excelled in sports and started to take a strong interest in painting. In 1965, Harold won a scholarship to study at the South Australian School of Art (the first Aboriginal to do so). He graduated with Honours in 1969 and later also studied social anthropology at the University of Adelaide. During this time there he became actively involved in the Aboriginal Civil Rights movement and designed the Aboriginal Flag in 1971. In 1995, the flag was made an official ‘Flag of Australia’. Later Harold was involved in a high-profile case in the Federal Court and the High Court, to assert copyright over his design.

For more information about Harold visit: http://www.territorycolours.com/harold_thomas.htm History of the Aboriginal Flag *Activist Gary Foley took the flag to the East Coast where it was promoted and eventually recognised as the official flag of the Aboriginal people. *The flag was first flown at Victoria Square in Adelaide on National Aborigines Day, 12 July 1971. *The flag was chosen as the official flag for the Aboriginal Tent Embassy and was first flown there in 1972. *In 1995, the Australian Government proclaimed the flag as an official ‘Flag of Australia’ under section 5 of the Flags Act 1953. *In 1997, Harold Thomas was recognised as the author of the artistic work under the Copyright Act 1968.