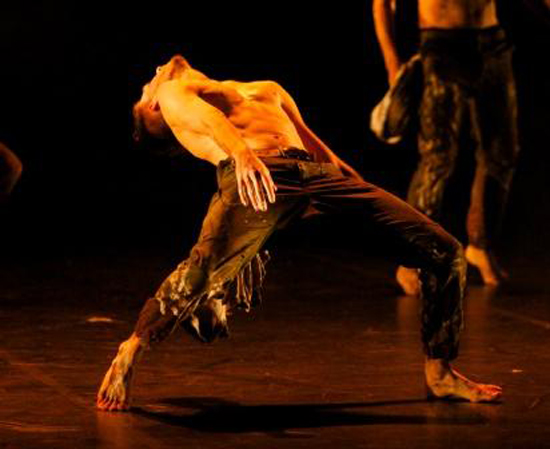 Bangarra’s latest production Blak is making it’s way to Wollongong and Sydney.The exciting new creation, which is a choreographic collaboration between Stephen Page and young Bangarra dancer Daniel Riley McKinley, has been receiving great reviews from audiences and critics.

Blak is divided into three performance parts all with the intertwining theme of identity, and what Bangarra’s Artistic Director Stephen Page describes as being a progression from his last social theatre work, ID. Stephen was looking back at the works that Bangarra had produced and decided that the time was right for this type of work.

The first part, called Scar, is a 25-minute piece choreographed by Daniel Riley McKinley, a Wiradjuri man. Scar features the seven men of the company exploring the journey from a black perspective, asking what is the scar track that young urban men travel? Compared to what traditional, customary initiations are in rural communities, what is an urban initiation these days?

The second part of Blak is a piece entitled Yearning and is essentially the women of the company addressing the same types of issues as in Scar. The third part to Blak is Keepers. This stage of the production is more abstract and has the dancers joining together onstage – contemplating the cultural issues that arise in husband and wife, brother and sister relationships. What are the customary roles of each gender? Also, how do you know when you are an Elder?

Blak is in Wollongong tomorrow and Saturday before it heads to Sydney from the 7-22 June. Following the show in Melbourne earlier this month, reviews have been positive. “The closing image of the ochre-stained dancers standing behind a falling curtain of sand captures the premise at the heart of Blak; it’s at once immediate and timeless, contemporary and traditional. Spine-tingling moments like these are part of what makes Bangarra’s performances unique.” The Age For dates and tickets to their upcoming shows head to www.bangarra.com.au .