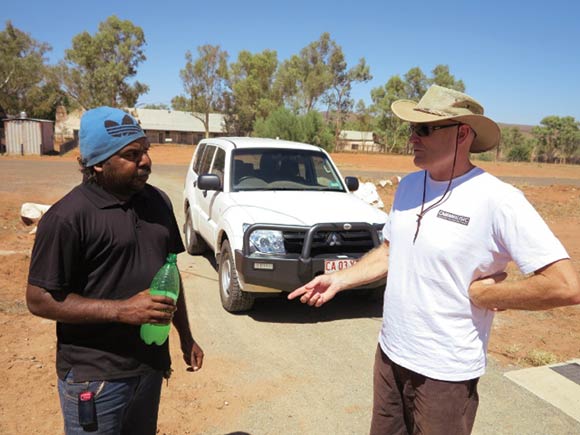 With significant expansion coming up over the next year, CAAMA Music Label Manager Micheal “Miko” Smith spoke to InVibe about the regional music program and the album releases coming up at CAAMA in the next few months.

The regional music program aims to train and mentor 16 Music Rangers in Central Australia and remote WA and SA, together with Charles Darwin University (CDU). Rangers complete Certificate II in Music at CDU and are mentored by CAAMA’s Sound Engineer Mark McCormack.

“Over the next three years, one month will be spent in each of the Ranger’s communities, recording the local musicians, teaching communities the basics of sound recording and training our Music Rangers,” Miko says.

“CDU will also be sending out a trainer to the communities as well, so rangers and their communities get the benefit of CAAMA music technology and CDU accredited training.”

Music Rangers will be mentored over the three years while on the program. All the participants have been selected from their local communities and will be the ‘go to’ person for local music, Miko says.

“CAAMA hires out studio equipment to communities already. Part of what we want to do is train the rangers so they are competent in operating and maintaining the equipment. Maintenance and repair on the equipment will also increase the longevity of music in the communities.”

Over the three years of the Certificate and the mentoring, CAAMA is aiming to build the confidence of the Rangers to better their music practice.

The Rangers come from a variety of backgrounds from youth work through to musicians.

“We really want to create a space for music in the communities,” Miko says.

“We have a good range of equipment at CAAMA which the rangers will be able to hire from us. In the past we haven’t had the staff to expand the hiring of our resources, but with the Rangers we will have more people to manage this in the communities.”

Rangers will also have the opportunity to work at various festivals, including the Desert Festival.

The program is all about creating a succession plan and setting up the future for CAAMA Music.

“Aboriginal people need hands-on skills in music in their communities. We need people to work for us and we need to create the work,” he says.

Along with the program, CAAMA is also aiming to re-align their music label with the communities.

“We’re going back to the grassroots. In the future, we’ll also be expanding our distribution. We want to be the biggest distributor of Aboriginal music in Australia

and we want to offer our artists full label services,” Miko says.

“We’ve already been contacted by Yung Warriors who will be releasing their next album with us. And over the coming months we’ll be bringing new albums out from BlekBala Mujik, Tjintu Desert Band (previously known as Sunshine Reggae Band) and a debut release from Arnhem Land’s Stewart Gaykamangu who has previously performed with Gurrumul, Iwantja, Redsand, and Saltwater Band but is now focusing on his solo career.

“We are always looking to expand. If you’re Aboriginal and have a demo, get into Alice and we’ll work with you for a couple of days because we don’t want to miss anyone.”

Miko says the market for Indigenous music is growing and becoming more mainstream, with commercial radio increasingly picking songs up, including those in language.

“People want to listen to songs in language. It’s not just the tourists who want to listen to Indigenous music now. At CAAMA we are creating the potential for music that is played in the communities to be heard,” he says.

“Music is also playing its part in language revival. These guys out in the communities have a passion for their languages and they are pushing the revival through their music.”

CAAMA has also expanded its staff, putting on new trainees at its Alice Springs headquarters, and now boasts a team of eight full-time staff.

“I’m really excited to welcome to Alice Springs a team of music-industry specialists including a sound engineer, a producer, a promotions specialist, a project coordinator and two trainee sound engineers,” Miko says.

For more information, head to www.caamamusic.com.au