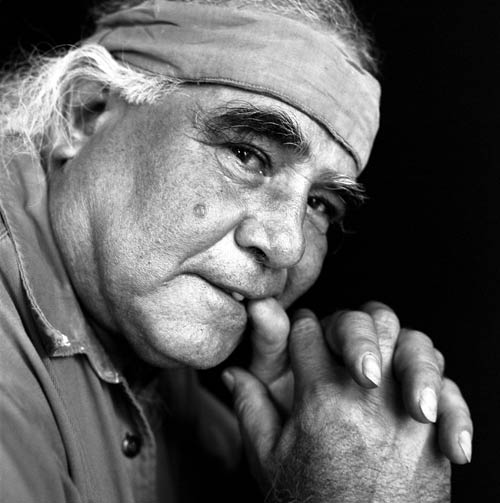 Rhoda Roberts: Our guest today is none other than Kev Carmody.

Kevin, we’ve heard some great feedback from the recent Kalkarindji festival that you attended, how was it for you?

Kev Carmody: It was excellent, Rhoda, just the coming together of the people – if there’s such a concept of reconciliation, it was on show up there – and just meeting all the old people, too. And a few of my granddad’s mob from Cape York came over as well, from Lama Lama country.

RR: For those who aren’t aware of the history, Kalkarindji is the place now, but in 1966, Vincent Lingiari worked on a station called Wave Hill, and they had set up camp on the river bank to strike because they simply weren’t paid wages. And of course Kevin’s song, “From Little Things Big Things Grow”, is the story of that strike. Now, Kev, you put out an album a few years back called Cannot Buy My Soul…

KC: That wasn’t so much to do with me, that was a mate of mine, Paul Kelly, and of course all the fantastic people that decided they wanted to be on it, and to me, that’s what music is about, it’s not about selling the stuff for money or anything, it’s about that creativity and people sharing music and doing it their own way, and the music evolved then from generation to generation.

RR: The album had bands like The Herd singing your songs, although I have to say, Kev, I like your versions better!

KC: But that’s the new generation, they’re putting their own words to it, they’re putting it into a hip-hop type music. When you look at the 20th century, musically, this concept of recorded music, and corporations and individuals owning music, it’s a total aberration. For thousands and thousands of years as we know from our culture and many cultures around the world, the community carried the music, the culture carried it, the families carried it, they were the custodians of the songs. Have a look at the Irish, have a look at the native people in America, the 20th century and the concept of corporations owning music is just an aberration.

RR: Over the years you’ve had some amazing reviews, but one of the things that has kept coming up since (the album) Pillars of Society back in the ’80s was you being labelled as ‘Australia’s Bob Dylan’, – well let me tell you, you are so much better looking than him and sing so much better!

KC: Look country woman (laughs), well you know, it’s a bit humiliating in some ways to be compared that way, but when you look at my concept of music and the American concept of music, it’s very different, not nailing Bob or anything, but I just like to challenge myself with the music, you know? You don’t have to be confined to the one musical box, like a folk singer or a protest singer or a rap singer. We, as Aboriginal people, we can use all categories. Don’t get stuck in the flamin’ country music box, you know what I mean?

KC: Just whack on a tin can and sing, don’t even put music to it, just do spoken word, don’t even rhyme the words.

RR: You have such a history with music, I remember those very early days. You’re a historian as well and were doing a university degree – did you ever finish that?

KC: No, because I signed a record contract, Rhoda! I had three flamin’ albums I had to put our pretty flamin’ quick, so I deferred it, but then you know, as the years went by they gave me an honorary doctorate, so I don’t know what I’m going to do from here on (laughs).

RR: Well one of the things you did do, apart from writing albums and so forth, was you got involved in other multimedia, such as writing compositions for films like One Night the Moon, with the song “Moonstruck” on the soundtrack.

KC: Yeah, that finished it off sort of thing, and Sara Storer’s version of that was phenomenal. She came up here about 12 months ago and we did a song about the Gurindji kids together. The whole basis of the song was, when she went to teach at Kalkarindji – she taught there for a number of years – she said that she came away with the kids teaching her more than she taught them, and that was the chorus of the song.

RR: When you were out there recently, on Kalkarindji land, people there were really known as cattle people … are they still working with the cattle industry at the moment?

KC: See with that big tuberculosis outbreak, they had to get rid of all the cattle, so getting started again is really hard, like getting the money to get your breeding stock back again, and that’s just one of the things the community has to confront, then there’s intervention business; it’s also the fact that instead of having communities self-governing they’re under the auspices now of the shire, so losing a fair amount of their autonomy as well.

There’s a lot of positive things, too, like the cultural arts centre that’s being set up in the old powerhouse there and they’re starting to reclaim their art as a cultural expression, which is fantastic, and the Ian Thorpe Foundation backed it and Paul Kelly gave the song to the children at the school and they painted each verse and put out a little booklet and it’s all self help – they sold about 120,000 copies of it to fund their cultural centre. So they’re not looking for handouts, they’ll do it if they’re given the chance.

RR: Now I’ve got to ask you, I hear a rumour you’re about to release a five-CD box set of unreleased music…

KC: Rhoda, you’ve got the best Koori/Murri grapevine in the whole of Australia – it’s true.

RR: When are they going to be released?

KC: Look, I’ve got such a huge back catalogue that I’ve never released or recorded, and the family, Paul Kelly, John Butler, the mob of them, said, “Just sit down and do them”. The songs go back to 1967, so it’s ’67 to 2011, and I have a handy little studio just up the road here in the bush. I just walked in and we put down 40 or 50 basic tracks, then we did the pin the tail on the donkey type thing, selected 10 songs and there’s the first CD.

And the best thing is, I said, “We are not having a drum kit, and we are not having a bass guitar”, just to break that whole clichéd, same ol’, you know, drum, kit, bass guitar, rhythm guitar, lead guitar, lead singer and keyboard – nah, not doing it. So I’ve got a couple of 200-litre steel diesel drums, and 60-litre oil drums, block of stove wood, car rims, an axe, got a bike chain, a hand saw, kitchen knives, spoons. I made up an old tea-box base with a string and a broomstick – that’s the basis of it.

RR: I’m thinking this is a really good Christmas present. Listen, can you put “Jack Deelin’” on it?

KC: But that’s already been done! Tell you what, I got one on there that I wrote years ago. I remember I tried it out on stage about 15, 17 years ago, and I remember looking to the side of stage and I saw Archie Roach with tears in his eyes. It’s called “Black Jimmy”, and I’m going to put that on the first one, it’s about the only one I said I want on the first CD.