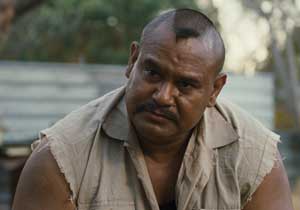 One of the stars of the film Mad Bastards, Greg Tait opens up about his life on both sides of the law.

Jail Break: Great to chat with you, Greg, and congratulations on the film – can you tell us a bit about your story?

Greg Tait: I was employed with the police service for 17 years. Prior to that I’d done the things that most guys do I guess, with no guidance or leadership, and that’s been because there was no father figure for me.

I was always in trouble, always being dealt with by the police. I was always in and out of the young boys’ home, and then later on when I was older I went to prison – done all that sort of stuff.

My second child was born when I was about 18, and I think that sort of slowed me down. I decided to settle with my girlfriend, who is now my wife. We eventually had some more kids and I had to play the role of father to my children.

My missus and I went through a bad bust-up and we split up for about 10 months. I went through a period of self-pity. I think, as a kid, I always had a reason to blame everyone. I suppose the main person to blame was my mother for not taking care of me and my father for leaving us. As I grew older I learnt not to do that and I learnt that in order to get somewhere you’ve got to take the bull by the horns, and that’s what I did. I realised that I can’t spend the rest of my life having self-pity and feeling sorry.

I feel a little bit sorry for my past and the way that things happened in my life. But I’m much prouder of what I’ve done to turn that around and take control of my life. I made a choice one time when me and my wife split up: I could either keep drinking and probably turn into a wreck and spend the rest of my life in jail, or I could try and turn my life around and be some sort of role model for my kids, and even win the heart of my wife back, and get my children and family back.

JB: I’m a little bit curious about when you gave up the drink?

GT: When I lost my grandfather, I hit the grog pretty bad and my relationship with my missus went downhill. What I’ve come to realise, with my missus, is that she did things the way I wanted things done. She gave me the freedom to be who I was and she was good to my kids. She was a good mother and good carer for my children and I could go and work.

I remember in a drunken state trying to choose which way I should take my life. One of the biggest things for me was thinking about my children. I sort of thought to myself I didn’t have a great upbringing. My father dumped my mother and left her with nothing. I thought I don’t want that for my kids, I had a pretty crappy life. I thought if anything, if I can’t get back with my wife, at least I could build a better relationship between me and my kids.

That was the biggest thing for me. And then I decided, well, I’ll make a change, I’ll try. I mean, I had a criminal record. I knew that I couldn’t get many jobs. For the first 12 months after I gave up the grog, I joined the volunteer fire brigade, and I did other little jobs around the place, little part-time jobs. I wanted to prove to people that I can do anything if you give me the chance, and if you can trust me I am a valuable person, that I’ve done wrong, but I can be better and I can do good things.

I remember there were times when I was really bad on the grog. I remember thinking to myself that there’s no point in trying to prove I can make something of myself. I might as well just be who they’re saying I am. So I’ll be a criminal. I’ll be a drunk.

But when you realise that people have a tendency to be jealous and they want you to be under them on the pecking order and all that sort of thing, it’s up to you to be, well, not that sort of thing. I’m not below anyone. I’m as good as anyone. I can be anything I want if I put my mind to it, and I’ll choose where I sit in the pecking order and in life.

JB: What’s it like to be a copper in your own community?

GT: There are difficult situations, but it’s an easy thing to do. I mean the people in Halls Creek they know what I’m like. I don’t act differently to the way that I used to behave. The only thing I don’t do is I don’t go out fighting and drinking and doing all the silly things. But the way I talk and the way I sort of carry myself is still the same. I still treat people the same. I’ve never disconnected from my people, and that’s the biggest thing. Never stray from who you are. So I always try and give people the benefit of the doubt, and try and look after them as much as I can.

JB: Greg, you weren’t an actor… how was the experience of working in Mad Bastards? You were grandfather Texas in the movie, which closely mirrors your own life.

GT: I’ve got mates who say, ‘You’re a movie star’, but it hasn’t sort of hit me that way. I enjoyed it and I loved it, it was a really good experience, and I’m glad that Brendan (Fletcher, the director) took the time to listen to us and to let us play a part in the storytelling of the movie and writing the movie. I’m always willing to have a crack at anything and that’s how I took it. I didn’t think I was anybody special.