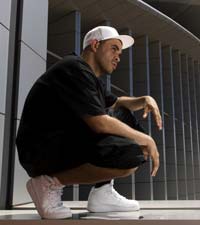 With so many new Aboriginal hip hop artists emerging all the time, it’s getting harder and harder to stand out from the pack. One man who is certainly doing that is Jimblah, a veteran of the local hip hop scene who’s just released his latest album, Face the Fire.

Deadly Sounds: Great to have you in the studio, Jimblah. This album is a bit of a new direction for you, particularly in having several female vocalists on board to collaborate. Can you tell us a bit about them?

Jimblah: I’ve got a few different vocalists on board. One of the girls is Georgia Humphreys. I’ve also got Alex Truehl and also my sister, Jada Alberts.

DS: They sound wonderful. Most people might associate you with rap, but this album has a real RnB feel to it, wouldn’t you say?

J: Yeah. Lately I’ve enjoyed getting a lot more vocal melodies on stuff to accompany the tracks. I think it was just the direction I was heading in when I was making the album.

DS: What about the track ‘If We Could’, there’s a lot being said there … tell us a little bit about that one.

J: I wrote it when my partner was away. She was away for like three or four months. It was just the state I was in and I really wanted to catch up with her and be with her. But it was just so hard – she was in another country. So that’s just the vibe I was going for. I got Zachariah Fielding to sing the vocal on it. I wrote it all and then there’s just a rap at the end. I wanted to flip it up and totally change the vibe at the end. So that’s pretty much it.

DS: And that long-distance relationship … did it last?

J: No it didn’t, so I think some kind of stuff went down and if you listen to the rap at the end you kind of get the vibe.

DS: A lot of the songs do reflect the experiences you’ve had over the past few years.

J: Yeah, that’s where I get a lot of the inspiration from: life, relationships and family.

I’ve always been about letting that life experience come through and music has always been a release for me. It’s just all come together.

DS: You’ve broadened your field a little bit, particularly with this new album. What do you have to do to sustain yourself? Are you working?

J: I work full time at a high school as an Aboriginal mentor with mainly the young fellas in Year 8 and 9. That’s what pays the bills. Sometimes I’m just in the studio too much and it gets a bit too intense, so it’s good to get away and have something else to focus on.

DS: It’s not always easy keeping our kids in high school. Often during primary school they’re so nurtured, and then they head off to high school and find they’re virtually on their own.

J: That’s the hard period I guess, they’re growing up and all the other influences come into play. I think that’s what’s good about my role, just having that reference and that friend to relate to so they don’t feel so lost when they get there. It’s definitely tough.

DS: There are lots of young people getting into the music industry all the time. Music is changing, technology is changing, what do you think the key is to keep maintaining your music?

J: It’s the passion and the drive. If the love is there, the rest can come. Sometimes things get hard and other things come into play. I just remember the reason why I got into music and that was because I love it and get real fulfilment out of it and enjoy it. That’s the key.