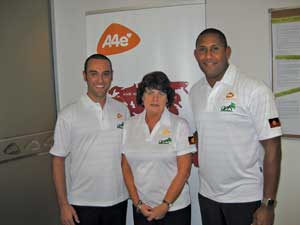 The pattern of being in and out of jail can be a hard psychological cycle to break, but an innovative new program currently operating out of a few NSW jails is trying to break this cycle by lining up employment and assisting with counselling and other assistance to reduce the mental barriers that inmates face when they are about to be released. The reducing re-offending through employment program is moving ex-offenders from jails into jobs.

Research has shown that obtaining employment is one of the main factors that can reduce the likelihood of a person returning to incarceration.

In ‘Staying Strong on the Outside’, a report on the justice system and Indigenous youth, ‘having a job’ was identified as the second highest factor in staying out of jail, just behind having a family and children.

Aboriginal and Torres Strait Islander ex-offenders face multiple and complex barriers to finding a job and staying in employment upon release. Research shows that for all prisoners in NSW, 47 per cent of those released go back inside within two years. But for Indigenous prisoners it is much higher. Aboriginal offenders are three times more likely to do three “laggings” (or periods of custody) than Non-Indigenous inmates.

In Australia, the A4e Group of Companies has been providing pre-and post-release employment support, mentoring and job training for Indigenous ex-offenders since 2010. The program has been working overseas, with A4e in the UK currently providing education and training to over 8500 prisoners across 28 prisons.

“As soon as an offender walks out the gate, all the support is gone and for the majority of ex-offenders there is no support to help them resettle back into the community,” says Aaron Simpson, Psychologist and Strategy and Innovation Manager for A4E.

He says under the Gateway to Work program, offenders are getting workplace skills, as well as following individually tailored plans to establish community connections such as housing and Centrelink assistance.

“This can address some of the other things that hold them back – which may be drug and alcohol problems, mental-health issues, fines, or other issues. It is a tailored plan that covers them three months before release and three months afterwards,” he says.

“We advocate on their behalf and get the ball rolling and lubricate the wheels of the existing services, (such as) Centrelink – we need to make sure that people can get the maximum amount of assistance they can, as well as move into the system and access services faster than they normally would.

“We attempt to work with employers who are looking to give people a second chance. We don’t want to set people up to fail.

We will negotiate and support the participant to use the skills that they got in jail.”

Part of this is helping offenders to move anywhere in NSW and support participants to access community-based counselling and family services.

Another innovative project is the Gundi Project, which is being run out of St Heliers Correctional Complex. Here, inmates are building homes for Aboriginal housing across the state. They build the stock homes and cut them up into five pieces, which are then transported out to Aboriginal communities.

Inmates at Goulburn and Cessnock also work on demountable buildings for the Department of Education classrooms.