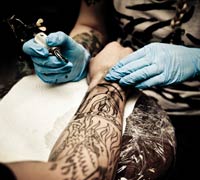 Tattooing has a long history – some put it at 5,000 years. Today it’s ‘in’ to have a tattoo, but the cliché ‘think before you ink’ applies in the modern world with an increased risk of Hepatitis C from tattoos from backyard operators and in prisons.

If properly done by an experienced tattoo artist, in a mainstream parlour that works under all the relevant codes and standards, there is little risk from bloodborne infections, such as HIV and Hepatitis B and C.

But a non-professional or backyard operator may be tattooing with cheap unsterilised equipment, increasing your risk of infection. Added to the risks in a non-professional environment, is the likelihood that a ‘backyard’ tattoo will most likely require ‘fixing’ at a mainstream parlour later on.

“I’ve never seen anything good come out of a backyarder and the chances of catching infection are high,” says Glen from Wicked Ink. “Backyarders will tattoo any age, and with substandard equipment. We often get people in here with backyard tattoos and they either want them removed or fixed up.”

A good mainstream parlour should tattoo according to a Skin Penetration Code of Best Practice. The Code sets out standards for equipment, sterilisation, cleaning, disinfection, waste removal, prevention of disease transmission, and health and safety in the workplace.

The Code in NSW is quite specific about the risks of tattooing without best practice standards: “Unhygienic practices and procedures may affect the health of both the client and the operator.

Where procedures involving skin penetration are not managed correctly, they have the potential to transmit bacterial and fungal infections, as well as viral infections such as HIV, hepatitis B and hepatitis C.”

Whether you decide to get a tattoo or not, Glen says the best advice is to think it through.

“You think about how you are going to drive a car… you should also think about what you’re doing when you get a tattoo. We operate under the Skin Penetration Code of Best Practice and our tattooists have been trained in infection-control procedures.

“We try to talk to the younger people about what they’re getting and if they really want to do it. We also don’t do certain things like tattoo hands and the neck unless someone is full of tattoos. Getting girlfriends or wives names tattooed is also a bad move because you never know the future – names might change.”

A tattoo can be removed, but it pays to know what’s involved. New laser techniques have made removal easier, but there is still a low risk of scarring and some people will develop lightening of the skin.

Despite the permanency of a tattoo – the fact it is not easily removed – it’s something young people will probably consider at some point. The trend of celebrities and sport stars with tattoos has made it more acceptable nowadays to get inked and the stigma of having tattoos is fading. Tattoos have become mainstream.

The art of tattoos is also a big drawcard.

“Most mainstream tattooists are artists,” Glen says. “Some are what we call wall tattooists, which means they will tattoo from the designs on the wall, but some people like to bring in their own designs.

“In terms of what people are getting today, there are no real trends. It’s just what people like and it generally goes on what they can afford to pay.”