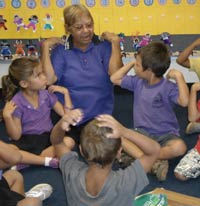 Speaking an Indigenous language has a positive impact on health and wellbeing according to a study of Aboriginal and Torres Strait Islander youth in remote areas.

An Australian Bureau of Statistics (ABS) study highlights the importance of passing down and using language, which is work that the Wa ngka Ma ya Pilba ra Aboriginal La nguage Centre is focused on in Western Australia.

Senior Linguist with the centre Jessica Denniss, says language connects Aboriginal people and Torres Strait Islanders to their identity and culture and has flow-on benefits to health and wellbeing.

“Most Aboriginal people have experienced so much loss of identity. The disconnect from their heritage is huge and the ability to access language is a powerful way to reclaim culture and identity. If you feel well adjusted and secure in your identity, then you are less likely to pursue destructive behavior,” Jessica says.

Wangka Maya Pilbara Language Centre runs programs in partnership with communities in the Pilbara to document, record and transcribe language for future generations. Teaching resources are then produced so that young people can learn and use their native language. Sometimes their documentation is the only record of language the community has left.

In 2008, young people living in remote areas who spoke an Aboriginal and/or Torres Strait Islander language were less likely (than those who did not) to:

There were 250 native languages used before white colonisation of Australia. Today, only about 20 languages are spoken as a first language by young people in Australia. “It’s very urgent that we reclaim language,” Jessica says, “because the longer you leave it, the more loss there is.”

In the Pilbara, language is used more by the older generation. “They are fluent in their language, but you see the loss as you go down in age,” Jessica says.

The centre produces picture books, interactive CD-ROMs and even mobile-phone dictionaries to engage young Aboriginal people to learn their native language. “The older generation is very passionate about our language work. At the centre, we work in partnership with them, and are guided by them. The ladies I work with want to get their stories down because storytelling and language are very linked.

Storytelling is the way language is passed down and a way for older people to share their language, life and experiences at the same time,” Jessica says. Teaching language literacy skills is best done by connecting sound with a letter. Words are written according to sound and the two are connected.

Literacy in your own native language is important and logical, Jessica says. “The simplest way to make sure language is passed down is to surround your kids with it. Speak it as much as possible and keep up that constant input. Make sure it’s used in the school, in the shops and at home, and then it becomes relevant to kids if they are learning it at school.”

Non Indigenous people also have a role in helping Aboriginal and Torres Strait Islander people reclaim their native language. “The biggest thing is to be willing to learn, too, and to try and understand what it’s like to grow up with the loss of language. Respect the efforts to reclaim language,” Jessica says.

“When we hear the French language we think it is beautiful and of value. We should feel the same about Australia’s native languages because they are truly amazing.”

The ABS April 2011 report found that almost half (47 per cent) of all Aboriginal and Torres Strait Islander youth (aged 15?24 years) in remote areas spoke an Indigenous language. These young people were less likely to engage in high-risk alcohol consumption and illicit substance use than those who did not speak an Indigenous language. They were also less likely to report being a victim of physical violence.

The report also showed that there was a decline in the proportion of Aboriginal and Torres Strait Islander youth who can speak an Indigenous language.

In addition, the report found that youth who had been discriminated against because of their Aboriginal and/or Torres Strait Islander origins in the past 12 months were less likely to be employed, studying full-time or able to get support outside of their households than those who had not experienced discrimination.

A further 4% of children and youth could speak an Aboriginal and/or Torres Strait Islander language, but did not speak one as their main language at home.

Of children and youth who did not speak an Aboriginal and/or Torres Strait Islander language as their main language at home, 16% were currently learning to speak one.