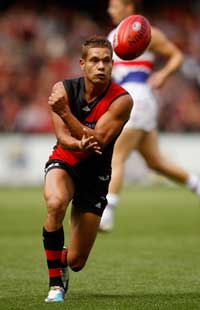 These Essendon AFL stars are all facing a pivotal 2011 season

At only 23 years of age, and now coming onto his sixth season in the AFL system, Patrick is already regarded as one of the most talented players in the AFL, despite having only just begun to scratch the surface of his obvious potential. 2009 was the lanky ruckman’s breakthrough year, and he backed that up in 2010 by leading the club in marks, tackles and hit-outs, and also added 21 goals for good measure. There will be added pressure on Patrick to take his game to a new level in 2011, and he’s expected to spend more time in the forward role.

A brilliant start to Alwyn’s AFL career was followed by a series of major injuries, which curtailed his development. However, a promising 2010 season in which the 24-year-old small forward finished second on the Bombers’ goal-kicking list means he comes into the new season with some valuable momentum and a two-year contract extension. When injury-free, Alwyn can comfortably take his place among the league’s most electric and entertaining players.

Of all Essendon’s Aboriginal players, 22-year-old West Australian Leroy Jetta comes into 2011 with a real point to prove. Drafted in 2006, Leroy was one of the most highly regarded young players in the country, having twice been selected in the Australian Under 18s squad. However, injury and inconsistent form has limited Leroy’s AFL appearances. Highlights of 2010 included a 26 possession game in Round 21, followed by a career-best 31 disposals against the Bulldogs in the final match of the season. This year, Leroy will be striving to establish himself as a regular presence in the Bombers’ midfield, and he has the potential to be a real X-factor for the club.

Mark’s start at Windy Hill wasn’t what he, or Bombers’ fans, would have hoped for. Recruited to kick goals, injuries restricted him to only four games and five goals for the season. After nearly 12 months without an AFL game, Essendon’s ‘forgotten man’ will be looking to revive his career in 2011 and return to the form that saw him top Hawthorne’s goal-kicking list in 2006.