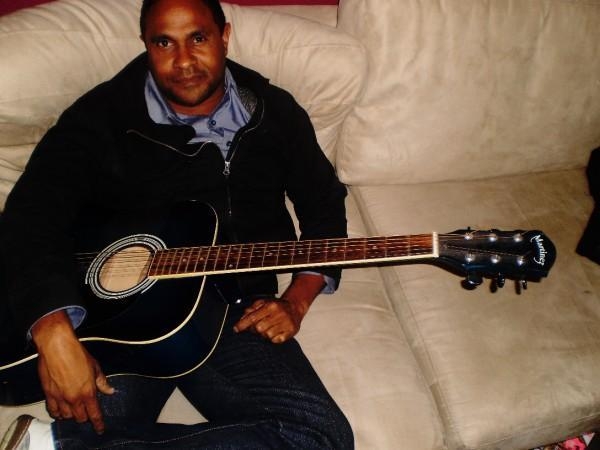 Singer, songwriter, guitarist and band front man Carl Stewart has been on a few journeys in his life.

He’s been a soldier in the Australian Army, an Aboriginal Educational Assistant and Community Liaison Officer, and now he’s a fireman. But if there’s one thing that stayed with him through thick and thin, it’s been his music.

Now, Carl’s teamed up with some new musicians and the Carl Stewart Band is rolling out fresh new sounds, rhythm and, importantly, a fresh soul.

JB: Where does the inspiration for your music come from?

CS: Well, firstly my Aboriginality and my childhood, relationships, love, break ups, the whole lot really, my identity, finding myself. ‘Journey’ is one song in particular that stands out. I was in the army for about 10 years. I was drinking and doing a lot of partying. Everything came to a standstill. I stopped drinking and I went home. It was about a year later I met my family. I went home because I was one of the Stolen Generation. It sorted, or opened things up for me. It was about a year after I’d been home, I started painting as well and doing art. Then I wrote a song and took up the guitar. At that point, when I stopped drinking, I saw myself – things came up from my past and I was able to let go. All these emotions came out. It was hugely therapeutic. These songs are part of my experience, hence the Carl Stewart band.

JB: What was your initial reaction to performing, what did you enjoy about it?

CS: What I found, from the first time I played, was the impact I had on the crowd and the people who came up to me afterwards. I remember particularly at this barbecue, there were a couple of girls and a couple of blokes who came up to me afterwards and hugged me. I’d brought the two girls to tears! When I saw that, I knew, that I was not only telling my own experiences from my own heart but people were relating to it, because they’d been through the same thing. That’s the power I’ve seen in every gig I’ve done.

Having the Carl Stewart band just adds to the emotion. The words come out and they’re powerful, straight to the heart. It’s all so powerful. You’ve got the lead breaks; you’ve got the drum beats. Everything sort of fits, the words, the emotion of the song and that’s very powerful.

JB: Tell us about your song ‘Initiation’.

CS: ‘Initiation’ is one of my songs based on my Aboriginality. When I went home I was quite impressed by the tradition of initiation in becoming a man. These are painful ceremonies and my brother said to me, ‘you’ve been initiatied in a sort of different way, your scars are on the inside, this is the pain of your life’. It made sense, so that’s why I wrote ‘Initiation’. I pictured a young boy being taken from his family and taken off into the desert, or wherever, and going through this ritual and then coming back as a warrior and a man.

When I wrote this song I think I also saw the pain at a physical level, and more about what my brother went through. I had a brother in jail and my nephew just got out after two years a different man, stronger, wiser, you know? I saw his pain as the same as I went through. I can see how it can be for someone in prison. I speak for all the boys when I say that as a musician, music’s powerful. If you can play a guitar or a drum or any instrument, it’s more powerful than going for a jog. To burn off the worries or pressures, it’s not physical it’s emotional, a sort of mental process.

JB: What does it feel like when you’re performing a song?

CS: It’s a very personal experience, I feel as though I’m at one with the guitar, as if it’s a part of you, the fingers are doing their own thing and the thinking’s going and my voice, all these things are happening all at once when I play. Playing ‘Initiation’ I picture the boy in the desert and the dark, and I’ll come out of it every now and then. It’s as though it’s not even me playing the guitar, the guitar’s playing on its own and I’m just singing. It’s a very powerful sort of feeling.

To put what you feel on paper is also very powerful. Men especially tend not to speak and to bottle things up. When I first started writing, tears would come. That’s when I found the power of song writing. People would say to me, ‘write how you feel’. But I’d think I’m not like that, I just don’t do that, I’m not a diary man. I don’t normally write about what I feel. But writing a song, I felt like, ‘go for it’, you know? It brought stuff up. Songs about breakups, love and relationships. Every single song has brought me to the point of tears, and I’m not a bloke who cry’s easily!

JB: What about performing with the band?

CS: When the band gets together, it’s amazing. What I like about these guys is I write the lyrics, the chords and the structure of the song and then they do what they feel. I know Richie (bass) takes his music personally and he’s very self-critical. But I find that’s really a good thing! I think a musician’s got more passion if they want to be perfect. I think that’s fantastic and that I bring words to the table and these guys take it on too with all their emotions. I really encourage them, whatever they feel, whatever they play up there I don’t care. I think that’s what gives my band power for the people. The reaction of the crowd amazes me and we get off stage and say to each, ‘really?’ It’s still surreal to us now.