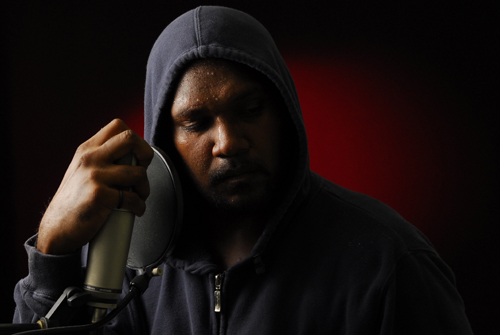 Torres Strait Island hip hop artist Patrick Mau, aka Maupower, Kid Blaze and Rogue Soldier, has no qualms with tackling big issues in his music, and recently joined us on Deadly Sounds to break down his latest album.

PM: Yes, we formed a crew, One Blood Hidden Image, and I do perform with them. We recorded and put out four albums under that title – but right now we’re all currently working on solo projects.

PM: Well, I built my own studio at home and the internet minimises everything, so when I do collaborations with people living in Brisbane, everything can be sent by the internet. Before I built the studio I didn’t know what I needed, so I met a guy that has a studio in Cairns, Nigel Pegrum, and I’ve worked closely with his Pegasus Studios over the years and from there I learnt how to build my own studio and sound engineer my own work and create my own music. So that’s what I’ve done because travelling back and forth to the mainland is too expensive

PM: Well, there’s black and there’s white, then there’s this grey area that people don’t touch on. To me, it’s that cloud over that black area where it’s like putting a smoke screen lens over it, where people just don’t want to touch topics under that area, it’s too sensitive. That’s what Moment of Clarity, Out of Control, Collision Course. Basically, I’m not afraid to exercise that right to touch on sensitive topics, that’s what DS: So what sort of sensitive topics do you touch on?

DS: You mentioned your track PM: This is a track with Gosouth, a new member and Cagney who’s an original member of our crew, and this is a track that says hip hop will not be going anywhere, we are running through the hip hop scene head-on.

PM: I’m a broadcaster and a producer/edito. I cut and edit interviews for the radio content as well as broadcast my own Indigenous hip hop program.

PM: Yes I am. I’ve done a few interviews with local artists in the Torres Straits. I’ve done some shows with them as well, with Northern Exposure up here and of course, my grandfather is Seaman Dan and I did a song with him. I have that advantage that I know the people in the community and I perform with them as well, or try to.

PM: We are planning some tours for 2011. I just shot my second video clip for the track http://www.maupower.com for tour updates and to purchase albums.