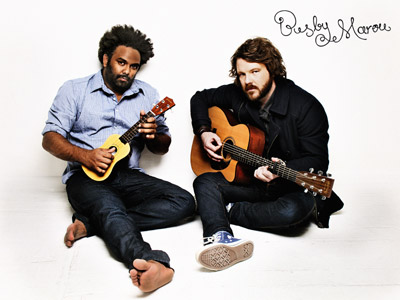 With their warm, acoustic driven tunes and harmonies, Busby Marou sound like a band that would have been right at home in Laurel Canyon, Californian folk scene of the 1970’s. Their self titled debut has already got the local music industry taking notice, and the bands two members, Thomas Busby and Jeremy Marou, recently dropped by the Deadly Sounds studio to chat about the new album.

Congratulation on the new album, what’s the reaction been so far? I saw the Sydney Morning Herald review – four out of five’s not bad…

Thomas: It’s been really good, the album has been recorded for a couple months now but then there’s all the tie-in’s, the mastering and all the album artwork and all the fiddly bits that we’re learning along the way, so we’ve been dying to get it out and there’s been a really good reaction from the media and a lot of people have been buying it – were actually quite surprised about the sales, so it’s pretty exciting.

Jeremy: It’s a lot of hard work in the studio and to actually see the artwork come together and listen to the final product, and to know it’s actually in-store so I can say ‘just go to JB HiFi and get it’. That’s really exciting.

DS: You two formed Busby Marou just before 2007, how did you meet?

Thomas: Yeah, about 2006, what happened is we’re both Rocky (Rockhampton) boys. I left after school to go to Brisbane for Uni, went overseas for a time, finished uni and thought, I’ll go back overseas. I had all these original tunes that I’d been writing and singing around Brisbane in the pubs paying my way through uni, and I wanted to put them on a demo before I left. I used to go home on holidays and play with Jeremy’s band, or play before Jeremy’s band for a bit of fun, and I knew he was a bit of a whiz on the guitar, so I called him up and said let’s have a bit of a jam and put these songs together and it just worked better than we probably both expected. So I didn’t end up going overseas, we recorded the demo, got some good feedback and just kept going with the EP and now the album.

DS: In 2007 you actually got to record your debut EP ‘The Blue Road’ with Australian singer songwriter Pete Murray. How did that happen?

Thomas: Pete is an old friend of my brothers from school, and I used to go watch him play around Brissie, and we’d meet up, play at parties, and he was just a good mentor for me all the way through, and fortunately for us he hit the big time with his album ‘Feeler’. He’s always been supportive of what I’ve written and now he’s supportive of both of us, what we’ve got. So it was just the right place, the right time and fortunately for us he was able to help us and teach us all the tricks and hurdles we’d have to jump because he’ d already gone through them – so it really was a blessing.

DS: So tell us about the process for this album, how did it all come together? Selecting tracks, writing…

Thomas: Fortunately we’d had some time recording with the EP, so we learnt a lot during that process with Anthony our producer and Pete, so we knew what to expect and we’d improved so much as a result of that. Most of our songs were written about home, or memories or places that we love and it’s all really laidback, folky pop sort of tunes. We asked our producer if we could go back home to Yeppoon to record it because it was a bit difficult living out of a motel room for a couple of weeks recording. So we went back home and it was the best move, it was so relaxed, we were there for a couple of weeks, we already had the songs nutted out so we were just laying tracks down, laying the vocals down, and Jeremy with the guitar and bass work – so great process and great fun, and we got to stay at home as well and catch up with family while we were there.

DS: You also won the Indigenous award that was presented to you recently by Kev Carmody. That’s a pretty big honour. How do you feel about how far you’ve come, you’ve had a bit of a dream run really haven’t you?

Thomas: On paper it probably sounds like a dream run, but we haven’t really earned any money in the last four years (laughs). We’ve had a long distance relationship, Jeremy’s up in Rocky and I’m in Brissie, we’re flying him down every weekend or were flying together somewhere and we’ve had to cop a fair bit of stick from our families, wives and girlfriends at the time, but, it’s all worth it because we’re getting busier and things are starting to get pretty exciting.

DS: So do you still have day jobs?

Jeremy: I’ve just started a new job actually working for an elders committee in Rockhampton. It’s a bit of a natural resources organisation looking after land care and opportunities for young Murris coming through to do stuff on their country. I enjoy working with elders. I guess I enjoy learning from them and really gaining that respect that the elders can teach you.

DS: And you’re from Murray Island in the Torres Strait, how did you get down to Rocky?
Jeremy: I was born in Rocky, my father moved down a long time ago, I’ve been back a few times but born and raised in Rocky.

DS: As a Torres Strait Islander, how do you cope with living in an inland town?
Jeremy: Well, luckily Yeppoon’s just down the road, so I’ve got a little boat. I get down there when I get weekends off, so it’s not too far from the saltwater, so it’s alright.

DS: Do you go fishing much?

Jeremy: Yeah we do..

Thomas: He doesn’t catch much though, not when he takes me out (laughs).

Jeremy: Tom’s never been on a fishing trip with me where we’ve caught fish because he gets sick, but we catch Reef fish, Spanish mackerel, all different types.

Jeremy: Yeah we are.

Thomas: Well we’ve spent more time together than we have with our own families the last few years. We’ve had to be.

DS: Well that’s a good point you make about the amount of work you’ve had to do to get where you are now, and the money will come in the future with the groundwork you’re laying now.

Thomas: Well we hope so. We were talking the other day as we were driving up to record a single for a project we’re doing at the moment. You know whatever happens now it’s just been unreal fun and whether we make it or not, really, you can’t take away the last four years. It’s been the best four years of my life and it keeps getting better.

DS: And you can’t take away the music either.

Thomas: No that’s right, that’s always going to be there.

Lookout for Busby Marou’s self titled debut album in stores now or buy online from iTunes.