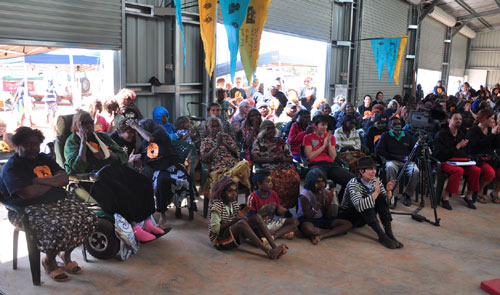 Thirty years ago, women from three remote communities decided it was time to take their health and their concerns for their communities into their own hands and so the NPY (Ngaanyatjarra Pitjantjatjara Yankunytjatjara) Women’s Council was born. Body: Today the women of the NPY Council remain just as dedicated to ensuring a strong, healthy future for themselves and their children. Deadly Vibe spoke with NPY Council co-ordinator Andrea Mason about their history, their successes to date, as well as their hopes for the future. “Over thirty years ago women of the NPY region were involved in the land rights discussions taking place in the mid 1970s. These discussions showed them that they needed a separate voice to put forward their concerns about their family, their country and their children directly to the government. So in 1980 they decided to form their own organisation,” says Andrea. The NPY Women’s Council became that voice and while the council originally just provided advocacy, it has since gone on to provide a range of important community services. “Women were able to talk about issues such as caring for their family, the aspirations they had for themselves and they were able to talk about that directly to the government. Back then the issues they were most concerned about included land rights, work for women, health for children, protection of women’s sacred sites, healthy foods in community stores, taking care of pensioners and housing. Petrol sniffing was also a real concern back.” While many of those issues continue to need attention, Andrea is pleased to say that one area has undergone significant change. “There was a lot of grief and anxiety around the levels of petrol sniffing and the amount of deaths. The NPY women’s council members could see something had to happen and that a radical intervention was needed. Along with two other partners, Central Australian Youth Link Up Service (CAYLUS) and the General Property Trust, we helped bring about the introduction of opal fuel into the region. Opal fuel is a non-sniffable fuel and since its introduction it has reduced if not stopped sniffing in our region. It was something the women cared deeply about,” says Andrea. Something else the women have come to care deeply about is the highly successful desert weavers program that was started by the NPY women’s council to provide ongoing employment for women in communities. “The Tjanpi Desert Weavers is another great success story. The NPY women’s council saw that there were not a lot of jobs available for women so they pioneered that enterprise as a way for women to generate their own source of income. The first workshop was held in 1995 in WA and now there are 300 weavers across the region,” says Andrea. According to Andrea, one of the reasons why the NPY women’s council has continued to grow over the last 30 years has been their cross-border and cross-community approach to health. “There’s no other organisation like this in Australia with members from three regions and across three states – South Australia, Western Australia and the Northern Territory. By delivering our services through a tri-state model we are able to look at a cross border approach which takes into account that people move across borders. That model has really made a difference.” The NPY women’s council now has over 30 staff and is continuing to expand its delivery of major services across the region. “We provide services from the cradle to the grave,” says Andrea. “Our programs include programs for failure to thrive for children aged 0-5, youth programs, domestic and family violence and sexual assault services, disability services, and services for the frail aged.” Thirty years on, Andrea says the Women’s council remains just as committed to improving the lives of their communities. “The Women’s council is trying to play its role in closing the life expectancy gap for people living in our region and in giving kids a good start and a safe community. The basic elements of community are still the same and still just as important in our remote communities. If we want to make improvements it comes back to advocating for basic services for people to have a good quality of life. That means good schools, well functioning health services, permanent police in communities, stores that provide good tucker and good governance.” Improvements in remote areas not only take time but also the willingness of different services to work with each other towards their common goals. That’s why Andrea says the council’s vision for the future is to continue to work hand in hand with dedicated organisations across the region. “In 30 years time what I’m hoping is that through the data we collect we really will be able to see we are making a difference in improving the quality of people’s daily life and helping close the gap in health. The Women’s council is not a big organization, so we need to work with other organisations and we can help complement and support each other’s services. It’s a vast area to provide services to but the NPY Women’s council remains 100 per cent committed to delivering those services.”