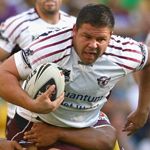 This Manly Sea Eagles and Indigenous All Stars prop is already on track to achieving all the health and sporting goals he’s set for the year.

How long have you played Rugby League for?

I’ve been playing since I was four. That’s when Mum and Dad took me down to play for the Walgett Dragons.

How did you get involved in the sport?

My dad and older brothers played, so it was a natural progression.

What do you love about league?

The competitiveness of the game, plus in my position I get to test myself out against some of the biggest guys in the NRL.

I like to think I’m one of the few traditionally shaped forwards left in the game: a bit cuddly but powerful enough to work it to my advantage.

Why do you think you made first grade?

I made my debut at the Roosters, but it wasn’t something that came overnight; it took a lot of hard work, time and effort and I had to stick to my goals.

Our training days are usually split into four different sessions, which include speed work, weights, skills and game-simulation drills followed by cardio or wrestling.

Definitely skills and game-related stuff because we get to use the balls and play practice games.

As a forward it’s important for me to maintain my weight because that goes hand in hand with my strength. My diet’s pretty simple. Normally I eat several small meals a day, but I do stay away from junk foods and foods that are high in fat or sugars.

Every now and then I have a day where I let myself eat something I have been craving. It might be a pizza or chips and gravy or some KFC.

I stay away from alcohol during the season unless it’s a one-off celebratory drink. It’s just one of those sacrifices you have to make if you’re serious about your sport. I am totally against drugs of any kind – the effects can be devastating not only for you, but also for those around you.

Healthy living and being involved in sport go hand in hand; you can’t have one without the other. Drink lots of water and eat healthy food. Stay focused on your goals: if it were easy, everybody would be doing it – the fact it’s hard makes it good.

I’ve already set my goals for 2010 across the entire season. My first was to make the Indigenous All Stars side and I achieved that, so now I want to play well. Beyond that I’m working on having a more consistent season with Manly and increasing my game time; later in the season, I want myself and the club to finish the year strongly.