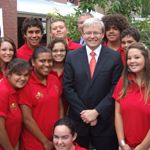 Prime Minister Kevin Rudd officially launched the National Indigenous Centre of Excellence this morning in front of community members and a who’s who of Indigenous sporting legends.

New South Wales Premier Kristina Keneally and Minister for Indigenous Affairs Jenny Macklin were also on hand for the opening of the centre, built on the grounds of the old Redfern Public School.

“What has been built here is a world class facility.

The National Centre of Indigenous Excellence will host programs and facilities for young Indigenous people to help them achieve their dreams and aspirations in the areas of sport, art, education and culture.

Following the ceremony, Mr Rudd was given a tour of centre where he chatted with local youth in the gymnasium, tutoring rooms, and even joined in a game of basketball.