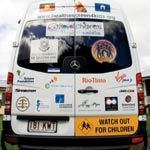 From ear to there with remote cameras.

Stopping at all the towns and major events, the van and its staff, including Cherbourg Health Worker, Cecil Brown, are on a tour-of-duty to check the ears of all Indigenous children in the region.

The rates of otitis media or glue ear in Aboriginal and Torres Strait Islander children in Queensland is endemic, at rates of more than 70 per cent. The Health-e-Piccaninnies program, as it’s known by the Cherbourg community, or its official name Health-e-Screen4KIDS, is a life-changing assessment service for communities.

“The project will not only benefit this community but could also be expanded to other rural and remote Aboriginal and Torres Strait Islander communities in Queensland and throughout Australia,” Cecil says.

Behind the brightly coloured façade, the van houses 3G wireless technology to send all data it collects back to researchers such as Dr Anthony Smith at the University of Queensland Centre for Online Health.

The information contributes towards the prevention of ear problems in Indigenous children. When ear disease is found and treated early, children are saved from losing part or all of their hearing.

Loss of hearing can have devastating effects on development, education and ultimately employment prospects.

The project is in the second year of a three-year pilot, supported by the Royal Children’s Hospital in Brisbane, the Cherbourg Aboriginal Community and the University of Queensland’s Centre for Online Health.