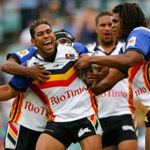 A scintillating two try performance by former Penrith and new South Sydney recruit Rhys Wesser sparked the Indigenous Dreamtime Team to a 34 to 26 win over the New Zealand Maori yesterday.

In a highly entertaining game played in front of a crowd of 10, 000 fans at the Sydney Football Stadium, the Maori were the first to strike, crossing in the opening minutes of the match before Canberra winger Justin Carney equalised in the 18th minute for the home team. Jamie Soward converting to the put the Indigenous side in front by two.

Wesser added his name to the score sheet soon after following a slick backline movement.

In the 25th minute Shaun Kenny Dowell leapt high to score off a Rangi Chase kick. Preston Campbell also produced his own piece of Individual magic, re-gathering his own chip kick and putting Rod Jensen over for a try, sending the teams to the break with the Aboriginal side leading 18 to 4.

Rod Jensen crossed for another try in the second half but two runaway Maori tries, one from an errant Preston Campbell pass and the other from a blocked Chris Sandow grubber put the Maori squarely in the hunt. When Arana Taumata stepped thorough the Aboriginal defense close to the line to score the Maori hit the lead for the first time since the opening minutes of the match.

Two late tries to Wesser and newly signed Bulldog Yillen Gordon however sealed a memorable win for the Dreamtime Team.

Following the match, Dreamtime captain Preston Campbell was presented with a replica of the OT Cordial Punch trophy that Maori and Aboriginal teams last contested in 1909.

Former Indigenous greats and members of the Indigenous team quickly called for the match to become an annual event.

“To get out there and represent the Indigenous people is a very proud moment,” said South Sydney-bound fullback Rhys Wesser after the match.

“It was great to take the game back to the grass roots and you saw all the people who came out today to celebrate this moment so I think that it would be good to have it every year. We’re very proud of our culture and if we could have this game once a year it would give us something to celebrate.”

Dragons half Jamie Soward was also a standout for the Dreamtime Team, kicking four goals and having a hand in several tries.