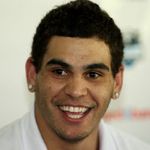 Ending speculation he may heading to European Rugby, Greg Inglis has singed a new four year deal with the Melbourne storm worth more than $1.8m.

It has also been revealed that Greg is in line to become the face of an Indigenous leadership campaign run by the NRL.

Inglis is set to become the poster boy for a proposed program involving other high profile Indigenous players such as Johnathan Thurston, Mat Bowen, Preston Campbell and Sam Thaiday.

The campaign would see the NRL’s top Indigenous stars conducting leadership programs in Indigenous communities, also allowing players to use their profile to earn extra income.

Inglis has previously expresses his desire to become a leader in the Indigenous community during talks with NRL boss David Gallop. The NRL is now ready to pitch its program to government and corporate Australia.

Having been courted by French Rugby Union clubs where offers off up to a million dollars per season have been suggested, Inglis’s decision to remain in league will be a major relief for the NRL who have suffered a tumultuous year following the mid-season walkout of Sonny Bill Williams.

The Melbourne Storm open their finals campaign against the Warriors in Melbourne on Sunday.