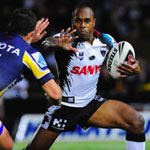 The South Sydney Rabbitohs have announced the signing of representative fullback Rhys Wesser for the 2009 and 2010 seasons.

Wesser, 29, has played 172 NRL games for the Penrith Panthers, scoring 112 tries since making his debut in 1998. Wesser has also represented Queensland in four matches in 2004 and 2006. Rhys was also part of John Lang’s premiership winning Panthers side in 2003.

Wesser is regarded as one of the most lethal attacking weapons in the game of Rugby League, holding the record for most tries scored for Penrith (112 to date) as well as holding three of the top four season tryscoring records at the Panthers (25 tries in 2003, 19 tries in 2006, 19 tries in 2002).

Wesser was also selected as fullback in the Panthers Team of Legends announced in 2006, named alongside players such as Brad Fittler, Greg Alexander, Royce Simmons, John Cartwright and Mark Geyer.

“This is a fantastic signing for the Club and we’re sure Rhys will be part of a team, and working in an environment, in which he can fire,” Rabbitohs CEO Shane Richardson said.

“He has a phenomenal tryscoring strike rate, he’s a great team player and we’re sure he will do a wonderful job for us at fullback.

Rabbitohs Head Coach Jason Taylor said: “Rhys Wesser is a quality player in all facets of fullback play and it’s really exciting to have him join us next season.

“He’s an enthusiastic player and I think he will fit in perfectly with the young backs we’ve got already.
“Our recruitment has targeted some experienced outside backs and he will do the job for us along with Colin Best next year.”

Wesser said he is excited about his move to South Sydney.

“I’m very excited to be making the move to Souths next season. I’ve been watching them for the last couple of years and I think it is a very promising Club with a lot of talented young players coming through,” Wesser said.