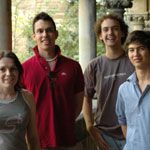 Students get a taste of uni life at Summer School

Twenty-two Indigenous students from across Australia took part in the 2007 Young Leaders Summer School, which ran from December 2 to 15 at Melbourne University’s Trinity College. The students came from all over – from Worawa Aboriginal College and Mooroopna Secondary College in Victoria, to Kalumburu at the northern tip of Western Australia, Yirrkala, Minyerri and Darwin in the NT, and Areyonga in the centre.

The aim of the school is to give Indigenous students a taste of uni life, and to help them realise the opportunities that are available to them through higher education.

During the Summer School, the students participated in a challenging course of subjects that included Imagining the Future, Critical Thinking, Sustainability, Drama, and Leadership, as well as optional units in fields such as Advertising and Creative Writing.

The students also got to know Melbourne in the evening, visited the Victoria Market’s Night Market, went rock climbing, learned how to bush dance, and headed off on a camp in the Mornington Peninsula.

The students worked in teams with other young people from as far afield as New Delhi and Kuala Lumpur on their final presentations, in which they explored how different their world may look in the coming decades, addressing a series of scenarios that they as future leaders could encounter.

In addition to the Young Leaders Summer School, Trinity has more than 10 Indigenous University of Melbourne students in residence, from Western Australia, Queensland, NSW, South Australia, the Northern Territory and Victoria