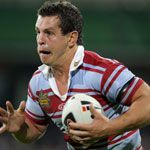 Wayne Bennet has publicly called upon Queensland selectors to name Scott Prince in the number six jersey for this year’s State of Origin series.

With Darren Lockyer being ruled out for six weeks after undergoing surgery on his injured knee, Bennet believes Queensland selectors would be “silly” to overlook Prince for the five eight role.

The former Queensland and Australian coach launched a passionate argument for Prince to partner Jonathan Thurston at the Maroons scrumbase following the Broncos loss to Manly at Suncorp Stadium.

“I don’t think Queensland would be that silly, personally,” said Bennett in response to mounting speculation Maroon selectors are set to pick Hunt at five eight to accommodate Billy Slater at fullback.

Prince has been involved in a growing selection controversy for much of the season after playing at career best form. The selection issue came to a head last week when Prince was twice overlooked for the Centenary Test following Darren Lockyer’s withdrawal and Jonathan Thurston’s injury scare during training. Michael Crocker and Storm halfback Cooper Cronk were the two players called in as last minute replacements.

The snubbing’s have caused widespread public condemnation of selectors from fans, particularly in Queensland and Bennett said any concerns the Maroons selectors might have about choosing two dominant players as their halves combination would be unfounded.

“What do you think Darren Lockyer is?” Bennett asked.

“Scott Prince is one of the best team players I have ever coached. We couldn’t be that silly. He was a five-eighth and he used to play five eighth – that was his preferred position, and he’s just a great team player. I had him here for three years so I’ve seen enough of him and he could have made the Australian team.

“Any role he had to do for the team … you see how he plays for the Titans every week. He’s their best team player, him and Nathan Friend.

“They’re just team-orientated guys. You see them do everything for the team, so I don’t think they’ll have any problems with Thurston being dominant. If Thurston’s calling the shots, I’m sure he [Prince] will be happy to sit back in the pocket and if Jonathan can’t call it, he will put his hand up and say, ‘I’ll get this call’.”

In other rugby league news, Greg Inglis was hailed a “freak” by coach Ricky Stuart after producing the highlight of Australia’s 28 – 12 defeat of New Zealand in the Centenary Test at the SCG.

After a Jonathan Thurston kick bounced over the head of New Zealand winger Sam Perret and appeared to be going dead, Inglis leaped spectacularly into the air at full stretch, caught the ball, and passed it behind his head basketball style to the waiting hands of Mark Gasnier with only inches to spare from the dead ball line for Australia’s first try of the match.

“I just thought to myself ‘how the hell did I do that?’,” Inglis said after the match.

At Belmore, Willie Tonga has played his last game for the Bulldogs after surgeons discovered more serious damage during surgery to the shoulder he injured during the round seven match against Manly.

Surgeons were forced to carry out a full reconstruction, ending Tonga’s season and his five year stint at the Bulldogs after he signed a five-year deal with North Queensland recently

Tonga was in contention for a possible Origin recall before the injury.

On the Origin front, Greg Bird has laughed of suggestions from Australian teammate Willie Mason that he should revert to lock for the New South Wales so that Braith Anasta can slot into the five-eighth role for game one.

Bird and Anasta are currently fighting it out for the NSW No.6 jersey, and despite another strong showing from Anasta during the Rooster’s 30 – 4 defeat of Canberra over the weekend, players are said to be backing Bird who is expected to win the battle despite playing the majority of his club football at lock.

After being heavily involved during the Centenary Test against New Zealand at five eighth, Bird helped lead the Sharks to an upset win over North Queensland the following night.

“I am still adamant I really want to play five-eighth for NSW if that is the way selectors want to go,” Bird said.

“I wouldn’t say I really put my claims forward after the Centenary Test because I didn’t have quite as dominant game as I would have liked.

“If we (Gidley and Bird) both get selected I believe both him and I can work towards a strong combination.”