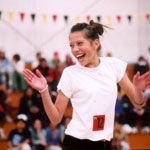 It was a weekend of oranges by the river for the Vibe 3on3® crew, as the travelling basketball festival headed to Mildura.

The Vibe 3on3® swung its way into Mildura on the weekend of July 28 and July 29 – the sixth time this popular travelling basketball and hip hop festival has visited the Sunraysia District.

The Vibe 3on3® brings together Indigenous and non-Indigenous people for a fun weekend of basketball, dancing, music, health and culture. The event encourages sportsmanship, teaches new skills and builds self-esteem as well as promoting reconciliation at a grassroots level.

Also joining the crew for the weekend was actor Luke Carroll, who spent the weekend hanging out with the locals and quizzing the young people of Mildura on their health and lifestyle knowledge as part of the Vibe Spin Out Wheel component of the competition.

More than 55 teams registered to take part in the structured dance, music, health and 3on3 basketball activities, with young people coming from the surrounding communities of Robinvale, Gol Gol, Wentworth, Dareton, Buronga and Swan Hill as well as the local Mildura area to join in the fun.

“This was the sixth time we’ve held the Vibe 3on3® in Mildura,” said 3on3 coordinator Claude Williams, who is a fan of the region’s sweet oranges. “Once again the community has confirmed itself as one of the top locations on the 3on3 tour.

“Even though it rained on Sunday, we still had well over 50 teams competing, which included teams from surrounding areas. The kids proved to be as good as any in Australia in basketball and dancing and openly expressed themselves in all facets of the event.”

The Vibe 3on3® is a two day Aboriginal youth weekend festival that incorporates basketball, dancing, art, culture and health. We aim to promote healthy lifestyles, strengthen communities and boost self-esteem. The Vibe 3on3™ is also an excellent opportunity for health services and related organisations to introduce themselves to the wider community. For more information, go to www.vibe.com.au

The Mildura 3on3 would also not have been possible without the support of our local sponsors the Mildura Aboriginal Corporation, the Mildura Basketball Association and the Mildura United Soccer Club.