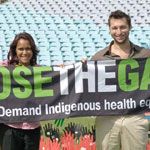 It follows the commitment given by each government at the December 2007 Coalition of Australian Governments (COAG) meeting to fix the Indigenous Health crisis.

“But this is just the beginning of a monumental task which will require sustained commitment and co-ordination over a considerable period of time,” Ms Bailey said.

The Close the Gap coalition is made up of 40 organisations. Members of the coalition will formally handover the 28,000 signatures of people from New South Wales who have pledged their support to close the 17 year life expectancy gap between Aboriginal and Torres Strait Islanders and other Australians within 25 years.

NSW Minister for Aboriginal Affairs Paul Lynch said Closing the Gap to improve the lives of Aboriginal people depended on working in partnership with communities.

More than 115 000 Australians have signed the Close the Gap pledge in support of increasing annual Indigenous primary health funding by $460 million, equal access to health services and Indigenous participation in their delivery, and action on social determinants such as housing and education that are leading contributors to the poor health of Indigenous people.

Their signatures are also being presented to state parliamentarians in similar events organised by Indigenous organisations and Oxfam Australia to be hosted in Queensland, South Australia and Victoria.

The New South Wales meeting today comes in the lead up to National Close the Gap Day on April 22, a national day of action where an estimated 400 events will take place across the country in support of the campaign.