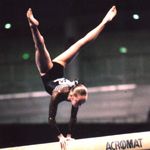 Talented gymnast Verity Flugge is only 11 years old, but that hasn’t stopped her from excelling in her chosen sport. Softly spoken and a little bit shy, Verity comes from Perth and has been training as a gymnast since she was two years old. Yes, that’s right ” two years old!

“My big sister used to do gymnastics and my mum thought it would be a good idea for me to do it, too,” says Verity.

Currently in Grade 6 at City Beach Primary School, Verity trains 30 hours a week at the Western Australian Institute of Sport. She is so good at what she does that the Australian Sports Commission has awarded her a scholarship through its Indigenous Sport Program.

The beam is Verity’s favourite event. To perform well on the beam you have to have very good balance. This is because the beam is very long and narrow, and high above the ground.

At last year’s national titles Verity came third overall in her age group after winning silver on the bars and floor, bronze on the vault and coming fourth on the beam.

Verity, who represents the Starmites club in Perth, has three major competitions to train for this year. They are the Women’s Australian Championships to be held in Melbourne, the Women’s National Clubs in Sydney, and the Canberra Cup Junior International.

Verity’s long-term goal is to represent Australia at the 2006 Commonwealth and 2008 Olympic Games.

So who does she look up to in the sport?

“Allana Slater,” says Verity. “She’s such a great gymnast and we train at the same gym. She got to go to the Olympics in 2000 and I watched her compete on television.”

When she isn’t training or competing herself, Verity likes to spend time with her horses.

“I have two Australian ponies, Alice and Bella, and I ride them whenever I can. Alice has a brown coat, and Bella has a grey one. When I’m finished with gymnastics I want to take up horse riding seriously.”

So, being a gymnast, does Verity fall off her horse less often than other riders?

“I don’t fall off at all, actually! But yes, gymnastics really helps with my horse riding.”

What is your full name? Verity Flugge.
How old are you? 11.
Where are you from? Perth, Western Australia.
Were you born there? Yes
Are you the oldest, somewhere in the middle, the baby, or an only child? The baby.
What do your friends call you? Verity.
What was the first sporting event you ever saw? A gymnastics event.
When did you start playing sport?I started doing gymnastics at the age of two.
If you could form a gymnastics team with your choice of players, who would they be and what would you call it? Elena Zamolochikova on floor, Nadia Comaneci on vault, Alana Slater on bars and myself on the beam. I’d call us “˜The A-Team’.
What’s the funniest thing you’ve ever done in a gymnastics arena? At the 2000 Nationals I completely forgot my routine! I looked over and a friend of mine started doing her routine on the sidelines to jog my memory.
What sport do you follow in your spare time? Horse riding.
Name a song that most describes who you are. I don’t think there is one.
What CD do you have in your CD player at the moment? “It’s Over” by Kurupt.
Most fulfilling experience in your life so far? Winning a gold medal in stage one of gymnastics.
What is your best asset? My gymnastic talent.
What would you most like to change about yourself? Nothing.
Who’s real deadly in your eyes? Alana Slater.
If you could have anything printed on a T-shirt that you had to wear for the rest of your life, what would it say? If you make a mistake, just keep going.
What’s your favourite part of Australia? Brenmar Bay in Western Australia.
You’re invited to a fancy dress party. Who or what do you go as? Cinderella
What animal or bird are you most like?Cheetah.
Make one prediction about 2002. Essendon to win the AFL premiership.
Where do you see yourself in 10 years’ time? Concentrating more on horse riding.