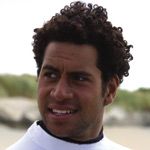 For 19-year-old Rangi Pito, there’s no better place in the world to be than on a board waiting for the next wave. But it wasn’t always that way. As a young teen, Rangi admits he was headed for trouble but thanks to a helping hand and the call of the ocean, he is now teaching others how to hold their own against the ocean.

“I lived in a very bad neighbourhood and it was very poor where I grew up,” says Rangi, who grew up in country Victoria. “I used to hang out with my mates and there was nothing to do so we’d do bad things. I guess it’s just the way you get brought up. If you get brought up in a bad place you sort of become bad, but when you find the good things in life like surfing and you get a bit older, you realise what you’re doing is bad.”

Despite getting off to a rough start, Rangi says that with the help of a friend along with his passion for surfing, he started to realise that he wanted more out of life.

“I started surfing when I was 14,” he says. “Surfing was a big help for me because it gets you focused,” says Rangi. “When you focus on something, you just forget about everything else in the world. If you have any problems you just go surfing and it releases all the heat that’s in you and you cool off in the water.”

These days, he’s not only cooling off in the water but carving it up as well. As a four-time winner of the Warrnambool Indigenous Surfing title in Victoria, he wasn’t too disappointed when this year he was pipped at the post.

“I came second and my best friend, Anthony Hume, came first,” says Rangi. “He was pretty rapt because I had kept on beating him every year. He won the title on his birthday as well so that was a good birthday present for him!”

For Rangi, however, the waves don’t belong only to the professionals but to anyone willing to give it a go.

“There are heaps of people that surf big waves that are just beginners and some surfers pay them out for getting in the way,” says Rangi. “I always tell them to leave them alone because they’re probably having more fun than what you are now. It’s like when I first jumped on a surfboard – it was the biggest feeling I’ve ever had, it was like a drug. I tell them to just think back to when you were their age.”

The fact that Rangi can still remember what it was like to be new to the waves is probably why he also likes to spend a lot of time teaching others how to surf in his new home of Phillip Island in Victoria.

“There isn’t anything hard about learning to surf – pretty well everyone gets up in their first lesson,” says Rangi. “We normally start by talking to the groups about rips and safety tips in the water and how to do CPR. Then we do a stretch and a warm-up. After that, the first thing we show them is the back arch. That’s where you lie down and arch your back up. Arching your back helps you steer the board and stops you from nose-diving as well.

“The next step is jumping to your feet. You go from the arch and then jump to your feet and make sure you land in the centre of the board and that your weight stays centred. You stay low and keep your hands on the board. Then you start to straighten your legs and you let go of your hands and use your legs as shock absorbers, sort of like springs. If you can’t stand up straight away, you can normally at least get onto your knees. From there, you bring one leg up and then the other until you’re standing up.”

Rangi says that ever since he learned to surf, he’s been hooked. He now spends his days either teaching surfing, making surfboards at Island Surfboards or just plain surfing. While he enjoys just hanging out in nature, Rangi says he still has some goals.

“I wouldn’t mind becoming really good at it and being number one in Australia – I guess my ultimate goal would be to go into the world titles and win it,” says Rangi.

Whatever he does, we’re sure this is one deadly surfer we’ll be hearing more about in the future.