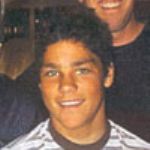 With a father who is arguably wilder than his 15-year-old son, Jay Davies was never going to be discouraged from getting into the knockabout world of surfing.

So far he’s managed to avoid injury in his chosen sport. Which is more than can be said for his father, Peter, who is recovering from a broken neck after jumping a BMX bike off a mate’s veranda.

Were he to sustain injuries, however, Jay would be in good hands. From the time he started surfing, his father, a yoga teacher, has given him daily massages to keep him in top condition. Now there’s a good reason to take up surfing!

In training since he was 10, Jay is determined to make it to the top of this highly competitive sport.

” My ultimate goal is to become a professional surfer and win the world tour,” he says.

He’s well on the way to doing just that. This year has been a big one for Jay, who came second in the Quiksilver World Grommet Titles, held in Sydney in July.

” I was so stoked, I didn’t know what to say. It was pretty exciting.”

Jay performed so well that major surf label Rusty decided to include him in their team, which also includes ASP world champion Taylor Jensen.

” I think I did well this year,” he says modestly. “Rusty are real happy with what I’m doing, so that’s a bonus.”

Jay, who has Navaho Indian heritage on his mother’s side, recently travelled to Hawaii as part of the Rusty surf team.

” It was great being in Hawaii. The surf was real powerful, way more powerful than back home. The weather wasn’t too good, but it was still fun.”

Growing up in Yallingup, Western Australia, Jay learned about his culture from his mother, Cari Davies, who believes it’s important to know about your heritage.

” I try to pass on my beliefs of how to live and how to get on with life,” says Cari. “No matter what your life has been, there are still opportunities to grow, even from the bad things that have happened.”

Recently, a group of American Indians from the States visited Jay’s family.

” We got together with some of the Elders of the local Aboriginal community and had a cultural exchange. Jay, like most kids, doesn’t really like to be different, but he’s accepting it now and becoming more proud of his heritage,” says his mother.

Jay now has his sights set on this month’s Quiksilver Australian Grommet Titles, which are being held in his hometown.

” I’m pretty confident because it’s just down the road in Yallingup. I’m looking forward to surfing my home break in such a big competition. I’ll be giving it all I’ve got.”

What is your full name:
Jay Davies.

Where are you from:
Western Australia.

Were you born there:
Sure was.

Are you the oldest, somewhere in the middle, the baby, or an only child:
I am the bubba of the family. I have an older sister and an older brother who rips.

What do your friends call you:
Gravy or Gravox.

What was the first surfing event you ever saw:
One with Taj Burrow and Jake Patterson in it.

When did you start surfing:
When I was six.

If you could form a team with your choice of surfers, who would they be and what would you call it:
Josh Kerr, CJ Hobgood, Catto, Damon and an old dude called Mogga. I would call it the Surfing Hombres.

What’s the funniest thing you’ve ever done on a surfboard:
Surfed naked.

What sport do you follow in your spare time:
Is playing PS2 a sport yet?!

Name a song that most describes who you are:
“King Creole” by Elvis Presley.

What CD do you have in your CD player at the moment:
“Like a Virgin” by Madonna.

Who is your favourite Aboriginal or Torres Strait Islander musician:
Ernie Dingo.

Most fulfilling experience in your life so far:
Every day of my life is fulfilling.

What is your best asset:
My feet.

What would you most like to change about yourself:
My hair ” it would be sick to be able to grow an afro.

You’re invited to a fancy dress party. Who or what do you go as:
Elvis.

Make one prediction about 2002:
That on the 25th of December it will be Christmas Day.

Where do you see yourself in 10 years’ time:
I am going to be the next Eddy McGuire.