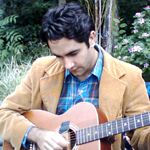 I first was inspired to write music after hearing Mozart’s Horn concerto No.3 in year 10 of High School. I’d never been so moved by a piece of music before. I was amazed at how much just a music, even with no lyrics or specific meaning could make me ache inside with such emotion, just from an arrangement of notes and sound textures. Then is when I first wanted to write music so as I might be able to make people feel as I did from listening to that piece of music.

The first piece of music I wrote after that was an additive minimalist piece for an assignment. It was very tonal for minimalism and it only had 3 parts. I then moved on to writing a short string trio piece, then on to a quartet using a computer where I input the notes on the screen and the computer would play what I had written so I knew if it was going to sound good or not. Listening to more and more classical music I began writing more and more sophisticated pieces. The best classical piece I wrote was a full orchestral piece for my HSC in 1997. I had the privelage of conducting the school orchestra which was a great joy. I hope to write more classical pieces later on down the track and perhaps conduct full scale orchestras playing my music once I have a name enough to do so. Till then I’d just better concentrate on my guitar and voice.

I stopped writing music when I left high school because I felt that I wouldn’t have the opportunity again to have any of my classical compositions played. Instead I just played a lot of baseball and delivered pizzas for work and was happy just making money and saving up for travel.

December 99 saw me write my first tune as a singer/songwriter. I missed the forfilment of writing a beautiful music, but decided to concentrate my efforts on more songwriter material because I thought it would be a lot easier to have a song performed, even if it ment me having to play it myself . I wrote 5 songs before I went to Brazil for 5 months in March of 2000. I wanted to use the trip to figure out what I really wanted to do with my life by distancing myself from my normal habits and routines back home to see what I would miss. Not long into my journey I realized music was it. Apart from my friends and family of course.

I came back aching to pick up a guitar again and write more tunes. I was very pleased to find that my songwriting was getting better and better. I hadn’t really sung since year 8 in high school vocal ensemble, which I didn’t really enjoy attending. So my vocal chords were a bit rusty and it was painfull to hear myself back on recordings singing out of key. I just really wished I could get other people to sing and play my songs so I didn’t have to. I still do wish that sometimes. Realising that I’d have to sing my songs myself to have people to hear them, I started practicing whenever I could. The main thing that really kept me practicing was just to record my songs on to tape so I could listen back to them so as I wouldn’t forget my new tunes.

My first gig infront of a decent size audience was playing solo in between my grandfathers sets at the Annandale Hotel in November 2001. I played 7 Hours, Give me Time and Heart like Snow. It was a pretty big crowd and I felt pretty good about my performance. My main goal of the night was to hopefully earn the respect of other musos as being a good songwriter.

For the next 9 months I just wrote and practiced at home until late 2002 when I started getting little gigs and playing open mics at places like The Harp, The Hollywood and a couple of small cafes. Once I got a residency at the Glengarry Castle Hotel at the start of 2003, other gigs just started coming my way from supporting friends bands and playing acoustic evenings. One of the best things to happen for me musically was to meet Paul Greene at his residency at the Fringe Bar. He asked me to come back the next week to play a few songs between his sets. He seemed to like my music and has since had me back to support him on a number of occaisions. Earning respect from him and other singer/songwriters has given me enough belief in music to feel confident enough to perform anywhere.

I started work on my debut album in June of 2003 which I ended up completing in May of 2004 with great effort and patience by Buzz Bidstrup and Martin Hailey. During this time I had the chance to record a duet with my grandfather for his album and tour with him to Adelaide and Melbourne. This gave me a real appetite for touring which I hope to be doing as much as possible throughout my career. I’ll go on my first tour on my own in the 2nd half of 2004 and very much look forward to taking my album around the country.