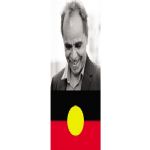 The Aboriginal flag has become a symbol of unity and national identity for Aboriginal Australia. Meet the man who designed it.

Acclaimed artist Harold Thomas, a Luritja man from Central Australia, is the man behind the Aboriginal flag that we know today ” a flag that is recognised around the world as image of solidarity and hope for the people of Aboriginal Australia.

“I guess I had my hunches,” he admits. “But when you create something like that you hope that people will see what you see. In the end it was the strength of the flag that carried it ” I never needed to promote it or flog it. It just carried itself from person to person.”

“The red is the red ochre of my childhood ” the desert where I grew up,” Harold explains. “The yellow stands for hope and for light that makes things grow.

Harold, a member of the Stolen Generations, began his career as an artist when he won a scholarship to the South Australian School of Art in 1965. He went on to become the first Aboriginal to graduate from an Australian Art School. In 1970 he started working as a survey artist at the South Australian Museum, during which time he designed the flag.

Aboriginal activist Gary Foley took the flag with him to the east coast, where it was adopted nationally by Aboriginal Australia in 1972 after it was flown above the Aboriginal Tent Embassy outside the old Parliament House in Canberra.

However, it was not recognised by the Federal Government as the official flag of the Australian Aboriginal people until 1995. This was after the image of the Aboriginal flag was beamed around the world when Cathy Freeman draped herself in both the Australian and Aboriginal flags during a lap of honour after winning the 200 and 400 metre finals at the 1994 Commonwealth Games in Canada.

In order to have the flag officially recognised, the Government proclaimed the flag under the Flags Act, which effectively made Harold’s design public property. He decided to reclaim the flag’s copyright, taking the issue to court.

“The case took about three or four months,” Harold says. “People were coming out of the blue to say that it was their design. I wanted to prove that I was the creator.

In 1997, the Federal Court of Australia officially recognised Harold as the creator of the flag. This protects the flag under the Copyright Act 1968 and so it may only be reproduced in accordance with this law or with Harold’s permission.

Today Harold continues to work as an artist, painting watercolour and oils landscapes, wildlife and portraits.

“My artistic style has been part of a long journey,” he says. “Basically it is more of a figurative or representative style ” it evokes my feelings about nature.”

Harold is also a writer, and last year was shortlisted for the annual David Unaipon Award for unpublished works by Aboriginal or Torres Strait Islanders. His manuscript focuses on his life leading up to 1971, and deals with the issues facing Indigenous Australians at the time, including discrimination and loss of culture.

“I hope to publish it eventually, but I need more time to make it spot-on,” Harold says. “I also write poetry, through which I’m able to deal with political issues such as the Stolen Generations in a personal way.”

Harold remains as passionate about Aboriginal rights today as he was 30 years ago, and looks forward to a time when Black Australia can claim its own leader.

“The journey of us is still continuing,” he says. “Today you can be a doctor or a lawyer, but you also need to maintain your identity ” you gotta bring your mob with you. Too many people forget who they are.

“Young people are our future now. They need to stand together.”