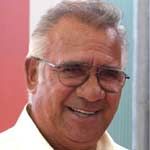 Wiradjuri elder Stan Grant Senior has been named a member in the General Division of the Order of Australia.

Mr. Grant is noted for his dedicated work in preserving Indigenous language and culture and has helped launch several teaching programs across New South Wales.

Stan is also the co-author of the first Wiradjuri dictionary and the Queen’s birthday honour recognises his service to Indigenous education and youth.

Having taught language and culture in various prisons and correctional centers, Mr. Grant says he has seen many troubles lives turned around.

“I think if there are people out there working on culture and language and stuff like that I think we should be employing more and more of our people to go into jails, elders in particular,” he said.

“Go in and talk to these young people and to show them a different way of life…Life isn’t spent behind bars. Life is spent out in the open and being free.”