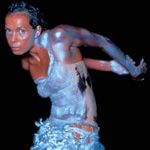 Frances Rings was born in Adelaide and is a descendant of the Kokatha Tribe. After taking dance as an elective at high school, she decided to pursue it as a career and so enrolled at NAISDA Dance College. While studying, she also toured with the Aboriginal and Islander Dance Theatre and performed with Bangarra Dance Theatre.

After graduating from NAISDA, Frances joined Bangarra Dance Theatre in 1993, performing in Praying Mantis Dreaming, Ninni and Ochres. In 1995 she took up an Australia Council grant to study in New York at the Alvin Ailey American Dance Theatre.

Her career highlights include performing in the opening ceremony of the Sydney Olympic Games, at New York’s Brooklyn Academy of Music as part of the Next Wave Down Under Festival, and at the Kennedy Centre in Washington D.C. In 2002 Frances made her mainstage choreographic debut for Bangarra with “˜Rations’, the first half of the acclaimed production of Walkabout.

Frances has also presented for SBS TV’s ICAM, including interviewing Sinn Fein leader Gerry Adams, and presenting live-to-air coverage of the Corroboree Walk 2000 across the Sydney Harbour Bridge for SBS.

“I have to say it ” Frances Rings gets a ring!” And with that, the vivacious Bangarra Dance Theatre choreographer and dancer slipped the golden ring featuring a big black “˜D’ set with rubies onto her finger.
Frances was just one of the professional dancers who were thrilled to see that this year’s Deadly awards included a dance category for the first time. She was up against some fantastic dancers – fellow Bangarra colleagues Peggy-Joylene Misi and Elma Kris, and Rayma Johnson and Kerry Johnson.
Frances first became interested in dance after taking it as an elective subject at school – she was also an excellent public speaker and great at drama. All these skills would come in handy for her later career on the dance stage.
Frances joined Bangarra Dance Theatre a decade ago; since then, audiences around the country have seen her silky dance skills in productions such as Praying Mantis Dreaming, Ochres and Bush. She also broadened her skills by studying at American Dance Theatre in New York in 1995. Audiences overseas have also seen Frances dance ” Corroboree was performed in Washington DC, and she was part of the opening ceremony at the Sydney Olympic Games.
Frances has now broadened her skills by moving into choreography ” her mainstage debut as choreographer occurred in 2002, with the Rations duet in the production Walkabout.
After Walkabout won three Helpmann awards ” including one for best new Australian work ” The Sydney Morning Herald said that the production “heralded an outstanding new talent in Frances Rings”.
Well done, Frances. You’re one deadly dancer!