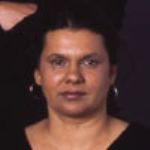 Film- maker Erica Glynn took a job with the Australian Film Commission recently, but it’s not going to stop her from doing what she loves most ” telling people’s stories via film.
SBS this month screens Erica’s latest half-hour documentary ” Ngangkari Way ” about two traditional healers in the central desert, and how they work alongside western medicine.
The story sprang from another of Erica’s docos, Minymaku Way, about the NPY Women’s Council (which employs the traditional healers).
The central desert is an area Erica knows a lot about. Her mum Freda Glynn co-founded the Central Australian Aboriginal Media Association (CAAMA) in Alice Springs.
Erica started her career with CAAMA, and in 1988 fronted Urrpeye, Australia’s first black current affairs show. She tried stills photography and broadcasting, but knew early on that her passion lay with film.
She’s pleased with the way that Indigenous film-making today is embracing all sorts of genres and ideas.
” There’s been a tendency in the past to do issues-based stories,” she says. “Now it’s opening up to other kinds of storytelling.”