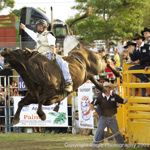 Most of us would prefer to stay away from an angry bull. These guys like to ride ’em.

As the hot sun beats down on the dry brown dirt, young children scale the boundary fence to catch a closer glimpse of the action. Local people mingle an d t alk amiably amongst themselves, as they come together for the biggest event of the year.

A man clad in jeans, long sleeved shirt and leather boots props his body above a weathered steel cage, known as a chute. From inside the cage come the sounds of a restless and powerful animal, ready to explode like a coiled spring. The sounds of the bull crashing its weight against the sides of the chute only ad d t o the tension in the air.

As the rider holds his position above the cage, onlookers hol d t heir breath in anticipation, waiting for that moment to come. They know that in a split secon d t he door of the chute will burst open and out will fly bull and rider for eight seconds of pure adrenaline. Welcome to the rodeo.

The other three events are steer (castrated bull) wrestling, rope and tying and team roping. All of these are timed events an d the animals are given a head start or ‘score” into the arena. The contestants try to complete their tasks in the fastest time while incurring the least amount of penalties or faults.

The rodeo is one of the biggest events in country towns around Australia, and Indigenous riders have played an important role in the history of the sport. Some of the most respected an d talented riders through the yeas have been Aboriginal stockman.

And perhaps the greatest of all known Indigenous rodeo riders who competed at the elite level was Alec Hayden.

Born at Piggot Camp, Queensland, in 1909, Alec remains a revered icon of the rodeo world.

Alec won the Australian buck jumping championship in 1936, 1938 and 1939, as well as the national bullock riding title in 1941. In 1937 he represented Queensland against New South Wales and woul d then join with his brother, Jimmy Williams, to represent Australia in a tri-series against Canada an d the United States. Alec was regarded as the greatest rider of his time. Sadly, he was killed at only 34 after being thrown and crushe d to death while cattle-drafting at Auburn Station.

Strap on your spurs and take a ride through the different events that make up a rodeo.

Saddle Bronc Riding
Saddle bronc riding has a rich history, going all the way back to the time when humans first attempte d t o tame the wild horse. Saddle bronc riding is regarded as the most technically difficult event of the rodeo. The rider can only control the animal with one hand, using a single rope reign. The rider earns points for riding skill, but loses points if they touch any part of the animal with their free hand or drop a stirrup or the reign. If the rider is bucked off, they are automatically disqualified.

Bull Riding
The most dangerous event at the rodeo, bull riding is the ultimate test of courage. With the bull weighing over a ton, the rider has to use all of their skill and concentration to remain on the bull for a full eight seconds. The danger persists long after they have fallen from its back, as the bull will often fiercely attack anything in sight.

Barrel Race
Barrel racing was the first ladies event introduced into professional rodeo. The rider must guide their horse through a clover leaf pattern aroun d t hree barrels before crossing back over the score line. Riders are disqualified if they do not stick to the clover-leaf pattern and are deducted points for knocking over barrels.

Rope and Tie
Roping an d t ying has been a common practice in the Australian cattle industry for over 100 years. As it is a timed event, the key to the sport is cooperation between the roper an d t he roping horse. The aim is to rope a steer from horseback. Once the animal has been roped from horseback, the rider then dismounts to tie the animal while the horse keeps it under control.

Steer Wrestling
Steer wrestling requires perfect timing between the contestant, their horse and another person, who together guide the steer from horseback in a straight path. The contestant must align themselves with the steer an d t hen, with one foot still in the stirrup, grasp the steer’s horns, halt its momentum and roll it onto its side.

Team Roping
Team roping is a timed event which involves two people, a header and a heeler. The header attempts to rope a steer aroun d t he neck, head or horns while the heeler ropes the steer’s hind legs. Points are deducted for improper catches to the head and horns or if only one of the steer’s legs is roped.