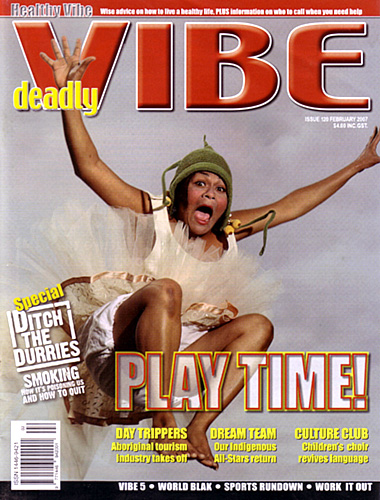 Music, mayhem and magic – a children’s classic is brought to life on the stage, with one of our favourite stars shining in a leading role.

One of the most refreshing things about singer and actress Ursula Yovich is that you never know where she might pop up next.

Proving her amazing versatility once again, this sweet-natured and extremely talented young woman has now charmed audiences with her performance in the new musical, The Adventures of Snugglepot and Cuddlepie and Little Ragged Blossom.

The production’s world premiere was held in January at the Theatre Royal in Sydney for the 2007 Sydney Festival.

The production is adapted from The Complete Adventures of Snugglepot and Cuddlepie, written by beloved children’s author May Gibbs.

An Australian classic, the book tells the story of Snugglepot and Cuddlepie – two gumnut babies which May Gibbs modelled on the young nuts on a eucalyptus tree. One day, the two foster brothers hear the wise old Kookaburra talking about “large, flightless mammals” – scary giant creatures known as humans. Of course, Snugglepot and Cuddlepie decide they want to meet one, and so they set off on their quest.

Along the way they encounter many friends, including Little Ragged Blossom, Mr Lizard, Fantail, Koala and Frog. But not all creatures in the bush are friendly, and so the young adventurers also find themselves having to evade the evil Mrs Snake and flee the mean old Banksia Men.

In The Adventures of Snugglepot & Cuddlepie and Little Ragged Blossom, the story has been turned on its head and adapted into a musical.

Directed by one of Australia’s most acclaimed theatre directors, Company B’s Artistic Director Neil Armfield, with music and lyrics by John Clarke, Doug MacLeod and Alan John, the production is boisterous, funny and irreverent, managing to capture the political and social issues of the day while maintaining the whimsical atmosphere of an imaginative bush fairyland.

“It’s a lot of fun,” Ursula says. “And it’s not just for the kids – there’s plenty in it for adults as well. People just love it because it appeals to their inner child. Even those who haven’t read the book are still familiar with the characters – it’s something we all grew up with to some extent.”

Ursula plays Little Ragged Blossom, in a performance that the Sydney Morning Herald described as “heartily engaging” and The Australian called “shining”. She captures the childlike essence of Ragged Blossom perfectly with her mischievous grin and natural charm making her a joy to watch. Together with a top-notch cast, she brings this tale of friendship, loyalty and acceptance to life in a truly beguiling, heart-warming and enchanting stage show.

“Playing a childlike character was probably easier for me than for some,” Ursula jokes, “because I always seem to get case in these young roles. It does get a little harder to tap into my inner child the older I get, though!”

“When you’re playing a child, you have to have a child’s energy. If you watch a child, you’ll see they never seem to stop moving. And it’s in the way they hold themselves as well – it’s a certain energy.”

The production combines childlike wonder with clever satirical wit, as the wayward wandering gumnut babies encounter newspaper fame, get lost and found and lost again, escape the clutches of the evil Banksia men, sing lots of songs, and even have time for a spot of cricket.

“It’s a pretty exhausting role to play,” Ursula admits. “But you have to throw yourself into it wholeheartedly, or it just doesn’t work.”

The production will be touring Perth and Adelaide, with future shows in other states a definite possibility. However, after finishing up in Adelaide, Ursula has plans to focus on something that she has barely had time to think about over the past year or so – her music.

“I’m really hoping to record my music in the near future,” she says. “It’s something that just keeps getting put on the backburner because of my film and theatre work. But I’m getting quite impatient now to do it.”

“It’s really my main focus right now. I want to start gigging and get used to performing as a singer rather than an actor. I know I can do it, I just need to get out there and give it a go.”