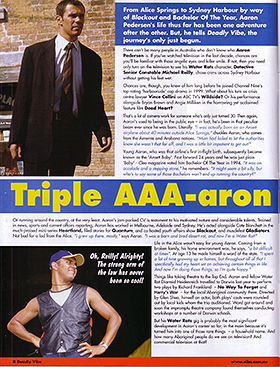 From Alice Springs to Sydney Harbour by way of Blackout and Bachelor of the Year, Aaron Pedersen’s life thus far has been one adventure after the other. But, he tells Deadly Vibe, the journey’s only just begun.

Oh, Reilly! Alrighty! The strong arm of the law has never been so cool!

“I spent a lot of time growing up in homes, but throughout all of that I specifically had my heart set on achieving certain things in life. And now I’m doing those things, so I’m quite happy.”

There can’t be many people in Australia who don’t know who Aaron Pedersen is. If you’ve watched television in the last decade, chances are you’ll be familiar with those angelic eyes and killer smile. If not, then you need only turn on the television to see his Water Rats character, Detective Senior Constable Michael Reilly, chase crims across Sydney Harbour without getting his feet wet.

Chances are, though, you knew of him long before he joined Channel Nine’s top-rating ‘harbourside’ cop drama in 1999. What about his turn as crisis centre lawyer Vince Cellini on ABC TV’s Wildside? Or his performance alongside Bryan Brown and Angie Milliken in the harrowing yet acclaimed feature film Dead Heart?

That’s a lot of camera work for someone who’s only just turned 30. Then again, Aaron’s used to being in the public eye – in fact, he’s been in that peculiar beam ever since he was born. Literally. “I was actually born on an Ansett airplane about 40 minutes outside Alice Springs,” chuckles Aaron, who comes from the Arrernte and Arabana nations. “Mum had failed to let the authorities know she wasn’t that far off, and I was a little bit impatient to get out!”

Young Aaron, who was that airline’s first in-flight birth, subsequently became known as the ‘Ansett Baby’. Fast forward 24 years and he was just plain ‘Baby’ – Cleo magazine voted him Bachelor of the Year in 1994. “It was an accolade and a stepping stone,” he remembers. “It might seem a bit silly, but who’s to say some of those Bachelors won’t end up running the country?”

Or running around the country, at the very least. Aaron’s jam-packed CV is testament to his motivated nature and considerable talents. Trained in news, sports and current affairs reporting, Aaron has worked in Melbourne, Adelaide and Sydney. He’s acted alongside Cate Blanchett in the much-praised mini-series Heartland, filed stories for Quantum, and co-hosted youth affairs show Blackout, and musclefest Gladiators. Not bad for a lad from the Alice. “I grew up there, mostly,” says Aaron. “I was a born and bred desert rat, and now I’m a Water Rat!”

Life in the Alice wasn’t easy for young Aaron. Coming from a broken family, his home environment was, he says, “a bit difficult at times”. At age 13 he made himself a ward of the state. “I spent a lot of time growing up in homes, but throughout all of that I specifically had my heart set on achieving certain things in life. And now I’m doing those things, so I’m quite happy.”

Things like taking theatre to the Top End. Aaron and fellow Water Rat Diarmid Heidenreich travelled to Darwin last year to perform two plays by Richard Frankland – No Way To Forget and Harry’s War – for the local Aboriginal community there. Directed by Glen Shea, himself an actor, both plays’ casts were rounded out by local kids whom the trio auditioned. Word got around and soon the impromptu theatre company found themselves conducting workshops at a number of Darwin schools.

But his Water Rats gig is probably the most significant development in Aaron’s career so far, in the main because it’s turned him into one of those rare things – a household name. And how many Aboriginal people do we see on television? And commercial television at that? “I have been on mainstream television now for about five years, and that’s a good thing,” he says. “But it’s also a bad thing, because when you weigh it up there are so few of us. There’s been Ernie Dingo and now there’s Deb Mailman in The Secret Life Of Us. Ultimately you have to say, ‘Hang on a minute, we’ve got to snap out of this.'”

Aaron is reluctant to portray his character on Water Rats as overtly Aboriginal, and he tries to dissuade the writers from doing likewise. “That way you avoid falling into stereotypes. My attitude has always been to leave that aspect to me. Just write me a particularly human story that could happen to anybody, and I’ll deal with it in a particular way.

“There are a lot of Aboriginal people who work in mainstream society, who go into mainstream positions that don’t have anything explicitly to do with their Aboriginality. We have to keep emphasizing that we are part of the workforce. In film and television, for instance, we are camera people, technicians, radio announcers, writers and teachers. We are all those things that exist in society, rather than all of the negative things that are too often portrayed. A lot of us get up and live our lives in a totally different way to the stereotypes. We don’t necessarily emphasize the fact that we are Aboriginal, or that we are proud to be Aboriginal, but the fact is we are.”

Working in the notoriously fickle entertainment industry is enough to make even the most robust personality crumble. So the fact that Aaron has been a driving force for so long is surely testament to his talent, confidence and perseverance. He says that the industry requires versatility and the willingness to try one’s hand at many different things. “Sometimes things work, sometimes they don’t. You just have to be prepared for that. The quote I try to carry in my heart is, ‘Don’t be afraid to fail … and fail big.’ My attitude is to take things on, and if you fail big then at least you’ve learned a massive lesson from it.”

Failing big isn’t what Aaron’s doing, however. Quite the opposite. The biggest lesson he’s learning at the moment would be how to put up with all his fans! And many of those fans would no doubt be highly distressed to learn that Aaron is no longer a bachelor. Having been married to comedian Lisa Serma for a little over a year now, he says he’s enjoying the amazing benefits of sharing one’s life with someone special. “Mind you, being a comedian she takes the mickey of me all the time!”

Aaron says his biggest hope for the future is that things keep moving forward in terms of reconciliation and healing between Indigenous and non-Indigenous Australia; that the legacies of Kumantjayi Perkins, Kumantjayi Gilbert and others are honoured and carried through to this new century. “I hope that all of their work doesn’t go unnoticed. I hope that what I’m doing is a contributing factor in continuing that journey, and that I can be as strong as they were when they were around.”