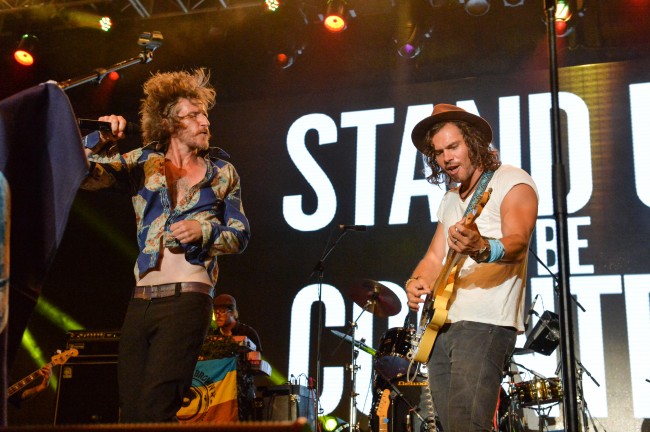 Tim Rogers from You Am I and singer/songwriter Benny Walker performed a version of Black Fella White Fella at the Apology Concert. Photo Andrew Rosenfeldt

From the soulful but rousing sounds of Archie Roach and the Into the Bloodstream choir, to the passion behind You Am I’s Tim Rogers and Echuca based singer Benny Walker’s Black Fella White Fella, Melbourne stood up to be counted at the Apology concert at the Sidney Myer Music Bowl on 13 February.

The concert, themed Apology – Heal Our Past, Build Our Future Together, marked the anniversary of the Apology to the Stolen Generations and brought together some of the best Indigenous and non-Indigenous acts in Australia including other headline acts Christine Anu and the urban roots band Blue King Brown.

Stolen Generations survivor and popular Melbourne based singer Kutcha Edwards opened the show after a Welcome to Country from Wurundjeri Elder Aunty Di Kerr and Aunty Caroline Briggs, Senior Elder of the Yalukit Wilum of the Boon Wurrung language group. 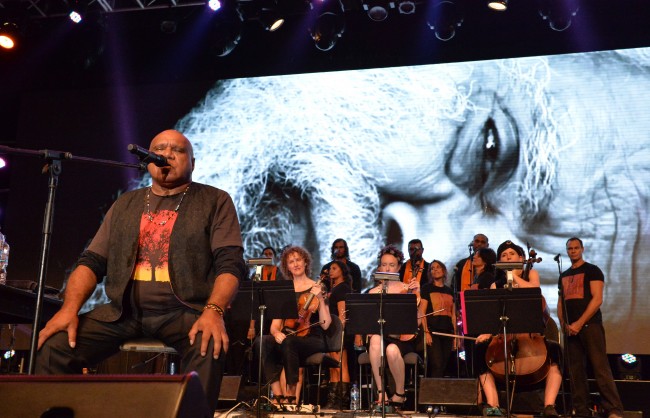 Archie Roach and the Into the Bloodstream Choir were a hit. Photo: Andrew Rosenfeldt

Brisbane based singer Thelma Plum was up next before a hip hop performance from Jimblah and Sydney based Horrorshow which got the mosh pit going. The beautiful voice of Clare Bowditch and the Frank Yamma and David Bridie performance held crowds spellbound, as did Christine Anu’s I’m Free.

Blue King Brown got the audience up and dancing for their set, complete with the hard hitting lyrics and grooves they are so well known for in Australia and overseas.

The concert was hosted by the Healing Foundation, an organisation established on the first anniversary of the Apology to support members of the Stolen Generations and their families through healing programs across the country. 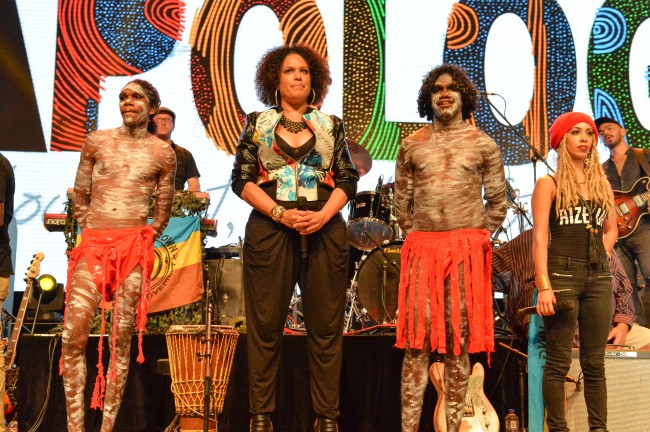 It was aimed at celebrating the anniversary of the Apology and creating a shared vision of unity and healing for Australia. Actor and comedian Offspring’s Eddie Perfect teamed up with Sapphires’ star Miranda Tapsell to host the show which drew crowds close to 7,000 strong.

“It’s a real honour to be here. For me, the Apology was an important step because it allowed us all to finally just reach the basic consensus that what happened was wrong. To be invited here with you as part of the process of what happens next, that’s very special.”

Miranda Tapsell who’s currently starring in the Channel 9 drama Love Child was also deeply honoured to be hosting the concert and recalled the emotion she felt when the Apology was made to the Stolen Generations in 2008.

“The Apology got Indigenous and non-Indigenous people working together. It was a wonderful action to take on behalf of the Australian Parliament and its people. It showed we can work together and we have to keep doing so,” she says.

For more information head to www.healingfoundation.org.au