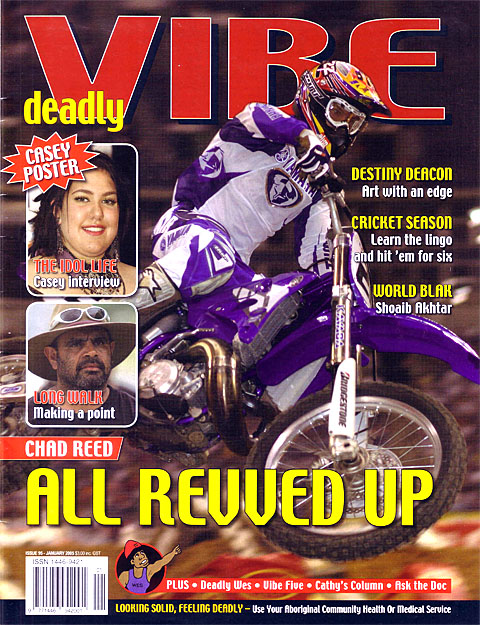 In the United States he’s a superstar, with a legion of fans and countless sponsors scrambling for him to endorse their products. But when Chad Reed returned home to Australia recently, there was barely a ripple.

So who is Chad Reed? He’s the reigning world supercross champion, that’s who. This 22-year-old from Kurri Kurri in the Hunter Valley region of NSW is the winner of the American Motorcycle Association’s US Supercross Championship and the US Open Supercross crown for the third time.

He’s got an estimated annual income of $5 million, a house in Florida and another in California, and he races in packed stadiums in front of wildly cheering crowds. So how can someone that successful barely rate a mention in his own country?

“It’s a bit disappointing that the profile of supercross isn’t higher in Australia,” says Chad. “I know Yamaha (his sponsor) are working hard to get information about my results out to the media now so hopefully that will help a little bit.

“I think the sport needs to get some regular television coverage and have a regular, set calendar of events so people know when it’s on, too. I think it’ll definitely grow; it’s just going through some teething problems at the moment.”

After reaching that level of success, many would find it easy to get swept up in all the adulation, fame and wealth and forget about their roots. But not our Chad. On a recent trip home to Australia after his big win in the US, Chad decided to donate some of his precious holiday time to helping out a group of underprivileged Indigenous kids from Redfern.

While in the US earlier this year, Chad heard about the troubles in Redfern and decided to place a call to the local police station, requesting a meeting with young people from the area.

“I felt really sad when I heard about the Redfern riots,” he says. “All those kids getting caught up in a horrible, violent situation like that is not good. So I spoke with my Australian PR team and they thought it would be great for me to try and do something positive with the kids.

“We heard that the Redfern Police had a mentor program going and it seemed to be the perfect fit. I really wanted to get the message out to them that if you put your mind to it you can achieve anything. You just have to believe in your dreams.”

Arriving in Australia last October, Chad volunteered his time to give coaching and instruction in motorbike riding to a group of Redfern kids at the Lucas Heights Police Citizens Youth Club minibike course, as well as giving some impressive demonstrations. He also took a group of 16 kids to watch him race in the final round of the Supercross Masters at Central Coast Stadium.

“Yamaha very kindly lent me some TTR90 bikes, so we took the kids to a motocross track at Menai,” says Chad. “We put them on the bikes and let them have some fun. We took them through a bit of a coaching clinic and I generally spent time talking to as many of them as possible on a one-to-one basis.

“Yamaha also provided the police with tickets to the Gosford event that I was competing in and they came and watched me race which was pretty cool.”

Yep, this is one seriously nice guy. In fact, after winning $100,000 in a race last year, he even gave his prize money to another rider who’d been injured in a crash.

Ever since he was a little boy, receiving his first bike at the tender age of four, Chad dreamed of being the world’s best supercross rider. For years he studied tapes of world-class riders, emulating their style as he practised on his backyard supercross track. By 2000, Chad was the Australian supercross champion. He was ready to take on the world.

“It was pretty great to achieve that as an athlete,” he says. “It’s nice enough to win, but to be only the second ever non-American to win it is a big achievement, and to be Australian is even better.”

Six years later, with his dreams realised, Chad is even more determined to keep on winning. With his new wife Ellie by his side, Chad has returned to the US to train for this year’s competition. So keep an eye out for this inspiring brother. He’s living proof that dreams really can come true.