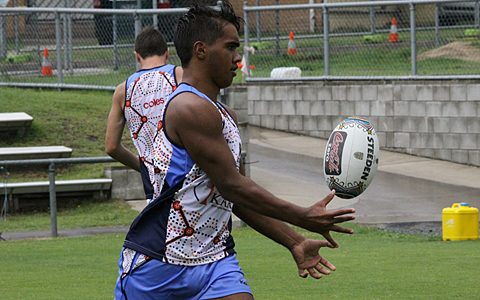 Rugby League’s first ever Indigenous Youth Tour to Europe will depart Rugby League Central today for a life changing experience which celebrates both the Aboriginal and Torres Strait Islander culture and the opportunities the game can provide for young Indigenous Australians.

The NSW Rugby League (NSWRL), in conjunction with KARI Aboriginal Resources, will send 32 players from towns as far reaching as Goodooga, Coonamble and Gulargambone to take part in the tour which coincides with the 2013 Rugby League World Cup.

The touring party will be farewelled by NSW Blues Coach Laurie Daley and will also receive a special good luck message from Kangaroos’ superstar Greg Inglis, who has generously shouted the whole team a trip to Disneyland Paris.

The side is made up of many of this year’s NSW Under 16’s which defeated Queensland 32-12 at Brisbane’s Suncorp Stadium in a curtain raiser to the NRL All Stars versus the Indigenous All Stars match.

“The NSWRL continues to invest heavily in Indigenous programs and we have a great history of providing the NRL with players from our elite programs,” says NSWRL Indigenous Rugby League Manager, Ricky Walford.

“We had five players from our NSW Indigenous Under 16’s side progress through to make the actual NSW Under 16’s which beat Queensland before State of Origin Game One in Sydney and that is credit to Steve Hall (NSWRL Indigenous Programs Officer) and our pathways programs.

“The tour is not only about the football aspects, it is about building these kids into future role models for their community and broadening their horizons through some unique educational opportunities.”

The touring party departs Rugby League Central this afternoon with the first stop on the trip being Barcelona. The side will then travel through France where they will visit the grave of an Indigenous soldier buried at the Somme as well as take on combined French Under 16’s and Under 17’s sides.

After a game against the London Broncos Academy, the tour will draw to a conclusion at the World Cup Semi Final double-header at Wembley Stadium.