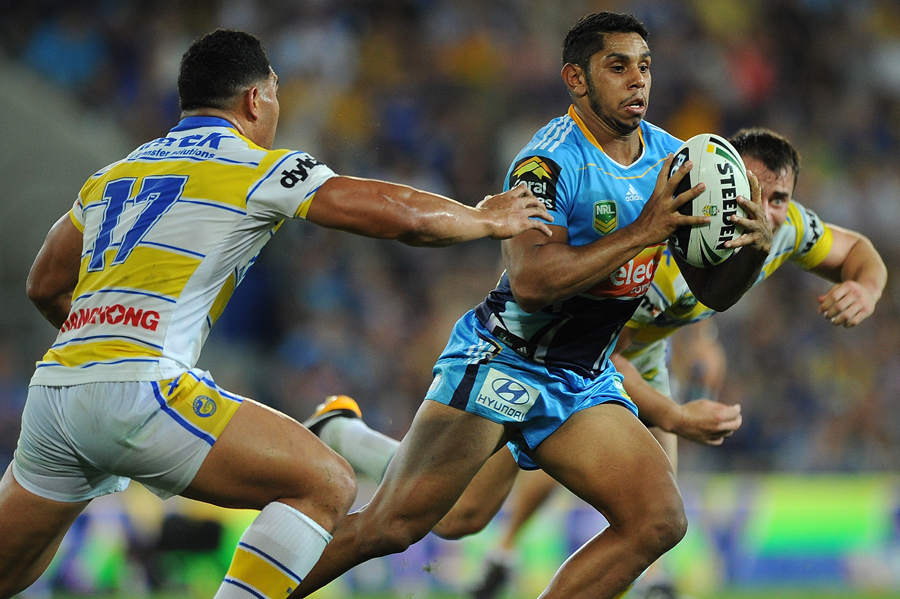 Round 10 of the NRL kicks off tonight with a Brisbane versus Gold Coast Queensland local derby. Brisbane is out to avoid its third consecutive loss and are still struggling with injuries. Key players, Scott Prince and Justin Hodges have both been ruled out while for the Titans Indigenous half, Aiden Sezer, will also miss the match due to injury. The Gold Coast lost a close one to the Dragons last round but has been looking good and is currently sitting in the top 8.

A major positive for the Titans in 2013 thus far, has been the form of young Aboriginal half Albert Kelly who seems to have put some off field troubles behind him at his new club and his playing with lots of confidence. Last week I gave Blake Ferguson a wrap for the brand of football he’s playing at the moment. After a great game against the Storm in Round 8, in Round 9 Blake bagged another three tries in the Raiders big win over Newcastle and has scored 36 points in two games. The dominance Blake has displayed in these two matches has caused some to brand him as New South Wales answer to Greg Inglis. This weekend, the Raiders play the Sharks in Sydney which is shaping up to be an interesting clash.

The Raiders are shooting for their third straight win and are enjoying a purple patch of form. If Blake fires once more it’s hard to see the Sharks winning this one. On Sunday we see a clash of two teams seemingly heading in opposite directions, when the Knights take on the Bulldogs in Newcastle. Timana Tahu has been dropped from the Knights side for this match. I should apologise to all Newcastle fans. Since I gave them a wrap a few weeks back they’ve lost three on the trot.

The resurgent Bulldogs however are on a three game winning streak and climbing the ladder fast. A feature of this match will be the clash of the fullbacks, Ben Barba v Darius Boyd. Ben has been quiet this season in comparison to the lofty standards set in 2012. With the Dogs slowly returning to full strength and gaining confidence, you get the feeling it’s only a matter of time before their mercurial number 1 has a break-out performance.