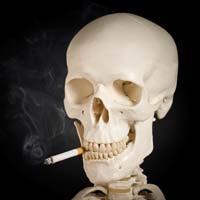 Live longer and get more out of life!

Not smoking helps you live longer by dramatically reducing your chances of heart attack, stroke and a bunch of other terminal illnesses – and it also helps you live better. You may not think about it when you’re young and feeling fit and healthy, but the longer you smoke, the more health problems you’re going to have later on in life, which is going to have a big impact on your standard of living. Being fit helps you to be active, which in turn boosts your confidence, self-esteem and wellbeing.

Think about all the horrible stuff smoking does to your appearance. People who smoke get more wrinkles and they age more quickly. Tobacco also stains your teeth, makes your hair go grey earlier than it usually would – and the toxins in cigarettes change the oil secretions in your face, making you more likely to have breakouts and bad skin.

There is no greater influence on a young person taking up smoking or not than the people closest to them: their friends and, more importantly, their family.

Research has shown that over 50 per cent of Aboriginal people smoke cigarettes!

With such a high number of our mob already smoking, it’s no wonder more of our young people take up the habit than any other group in the country.

So whether you’re a mum, dad, uncle, aunty, big bro or sis, whatever, it doesn’t matter, simply by quitting or not smoking yourself you’ll be doing the best and most impactful thing you possibly could to ensure our young people grow up healthy and strong.

Cigarettes don’t come cheap, and at $14 a packet, on average, the amount of money smokers end up paying towards their habit in a year, or even a month, can be staggering.

Think of it like this. At today’s prices, if you smoke one pack of cigarettes each day for 10 years, you’ll spend over $51,000 – easily enough to buy a new car or put towards a house. Also, think about what you could do for yourself and your family with that extra money.

And the financial benefits of not smoking don’t just end with what you’re paying over the counter. People who smoke are more likely to get sick, which means you’ll also be paying more on trips to the Doc and on medicines.

Help your people and culture survive

Smoking tobacco is one of the greatest killers of Aboriginal people and culture. Around 20 per cent of Aboriginal deaths each year are attributed to smoking tobacco. Aboriginal and Torres Strait Islander people, on average, die 17 years younger than other Australians, and tobacco is playing a huge part in that statistic. To turn things around, more of our mob have to stop smoking! And support others in our community to do the same.