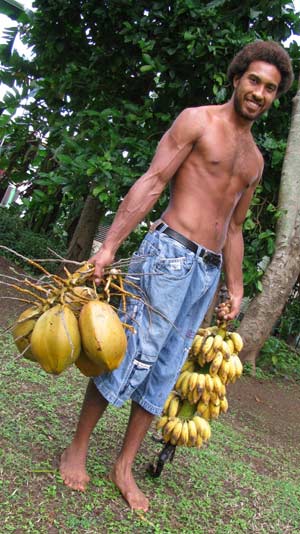 My name is… Torres Bradley Webb

My position is… I’m a Movement Monitoring Officer working for the federal Department of Immigration and Citizenship. I aspire to be a good role model and leader for my people in the Torres Strait. I’m a part of the Asia Pacific Indigenous Youth Network. I’m also a part of National Youth Week.

My mob is… My mob is from Darnley Island, I’m an Erubam Le. I’m of the Samsep tribe.

I live on… Darnley Island in the eastern Torres Strait. The population here is… about 400 people in four traditional clan groups. There are a higher percentage of young people in our community.

Brief History… On 1 July 1871, the London Missionary Society anchored at Erub in the Torres Strait to convert the South West Pacific Islander peoples, including us, to Christianity.

Before this, pearlers and beche de mer gatherers visited the island. Over many years these industries attracted an influx of seaman from the Pacific Islands, the Philippines and Malaya. Many of whom married local women and settled on the island.

Early in the 20th century, the Queensland Government started installing various facilities including schools, medical aid posts, a post office and an island industries board store. Darnley Island people have been at the forefront of the movement for adequate recognition of Torres Strait Islander’s rights, with Elder Statesman George Mye being political leader.

Description: Erub is a tropical island paradise. It is situated 350 km north east of Australia’s mainland. The largest of the eastern islands’ group, Erub is of volcanic origin composed mainly of lava and ash which has formed rich soil.The island has many beautiful beaches and is surrounded by pristine coral reef systems which are rich in natural marine resources.

Lifestyle: The council is our main employer here and we have an organisational run CDEP, but a lot of our community members fish for coral trout and mackerel and also dive for crayfish to earn extra cash, and for family. Because of the good soil here, we can grow just about any tropical fruits, so gardening is another main part of everyone’s lifestyle.

I personally grow watermelons, bananas, sweet potatoes, spinach, cassava, passion fruit, paw paws, guava, avocados, and I have plenty of mangoes. I grow these because my family has always grown their own; it’s traditional.

It’s a healthy way to live and the cost of fruit and vegetables in this area are approximately three times the cost things are down south. The floods in Queensland have driven up prices as availability is scarce now. One lettuce usually costs us $6 up here; that’ll be more now.