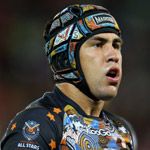 After a magic 2009 season, Jamie Soward has started the 2010 season by signing the first long-term contract of his career.

It was September 2008 and Jamie Soward had just suffered the humiliation of being dumped from the Dragons NRL side on the eve of their biggest game of the year. To make matters worse, it was the latest in several other demotions during the season, in which he’d spent lengthy stints playing reserve grade.

Less than a year before, Jamie was discarded by the Roosters mid-season and now it seemed a similar fate was just around the corner at the Dragons.

By all intents and purposes, the NRL career of Soward was dead and buried. The only glimmer of hope at the time was one conversation he’d had with the club’s new coach, Wayne Bennett, who was set to take over the reins in 2009.

Jump forward to 2010, and Jamie believes it was that conversation with his incoming coach that sparked his amazing transformation from fringe first-grader to one of the game’s best half backs, and now, a player worth more than a million dollars.

Bennett had let the much-maligned half know that he had faith in his ability and that he was very much a part of his plans for the Dragons in 2009.

Now, it seems the Dragons will be building their future around the speedy point-scoring dynamo after offering him a long-term three-year deal worth just over a million dollars.

“If I didn’t make it here I probably wasn’t going to make it anywhere,” said Jamie, speaking at the announcement of his new contract.

“Wayne called me halfway through 2008 and said ‘I’m coming next year and I see you in my plans’. He put the faith in me to stay, and now I’m looking to get on with playing footy.”

On the back of his coach’s faith, Jamie enjoyed a remarkable year in 2009, surpassing a number of long-standing Dragons’ records, winning numerous awards as voted by the fans and gaining his very first representative honours.

Add to that the fact that Jamie was named in the NSW Country team for the annual City vs Country clash, and scored the winning try in last month’s Indigenous versus NRL All-Stars match, and it’s fair to say the last 12 months have been something of a footballing redemption story, unlike few others.

Now that his playing future has been secured, Jamie is looking forward to being able to play without the cloud of winning a future contract hanging over his head for the first time in his NRL career.

“I wanted to stay at the Dragons and I am very happy that I will be here for at least the next three seasons,” said Jamie.

“I’m also very happy to have this all finalised heading into the season and to know where I am at for the next few years. The Dragons are a fantastic club who took a chance on me a few seasons ago and I think it is a great show of faith from the Club to offer me this contract.

“It’s the longest contract that I have ever signed and I am looking forward to continuing to work hard and repay the Club and fans for their support.”

Bennett, the man who played such a crucial role in revitalising Jamie’s career also believes the young player is far from finished on his ascent to the class of Rugby League’s elite players.

“It is great that Jamie has signed to stay at the club and we are all elated that it is done before the season has started so he can concentrate on playing football,” said Bennett.

The Dragons will take on rivals the Parramatta Eels in Round One of the NRL season on 12 March. That’s where Jamie will go head to head with the League’s latest rising star, Daniel Mortimer.

With a heap of pressure now on the young Mortimer to perform, having just signed a long-term contract with the Eels, he need only look at the player opposite him on the field as inspiration on how to overcome the hype and pitfalls of being a young NRL star.