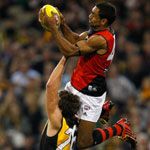 Essendon’s talented young crop of Indigenous stars ran out winners at this year’s Dreamtime at the G clash in Melbourne – the highlight of the round however went to Adelaide’s Andrew McLeod who broke the club record for most games played.

The AFL paid tribute to the contribution of its Indigenous players past and present on the weekend with its annual Indigenous round, and as usual, it’s Aboriginal players stepped up to mark the occasion with some standout performances.

Always the centrepiece of the round, pre-match festivities included a curtain raiser match between the West Vic Eeels and the Imalu Tigers (all the way from the Tiwi Islands), The Long Walk with Michael Long from Federation Square, performances from Geoffrey Gurrumul Yunupingu and Dan Sultan, all followed by a traditional welcome to country ceremony just before kickoff.

Played in front of 73 000 fans, Richmond led at the major break only to be gunned down by a red hot Essendon outfit that ignited in the third quarter and charged home for a commanding 40 point win – their second since taking part in the annual Dreamtime fixture.

Patrick Ryder played a big part in the Bombers third-term revival – taking a spectacular mark over three players in the fourth quarter.

Other highlights of the round included ‘Wave for Wirra’ day at Subiaco Oval, where David Wirrpanda was honored by Eagles fans during the clubs match against Collingwood.

Playing his 216th game, Wirrpanda passed Chris Lewis and moved into 11th place on the list of most games played by an Indigenous player. The Eagles also supported The Wirrpanda Foundation by selling merchandise at the game.

At the opposing end of the park, Leon Davis chalked up is 169th AFL match, grabbed 32 possessions and was named best on ground after sealing Collingwood’s upset win with two goals in the opening five minutes of the final term.

Elsewhere, Roger Hayden chalked up his 100th game for Fremantle and Chance Bateman was handed the Hawthorne captaincy in their win over Melbourne.

The greatest milestone of the round though fell to the man many believe to be the best Indigenous player of all time, Adelaide’s Andrew McLeod.

The Crows match with Carlton doubled as a tribute to the clubs leader, who ran out for the 313th game of his AFL career, surpassing Mark Ricciuto’s previous record to become the Crows most capped player.

Happening to also fall during the Indigenous round made the milestone doubly sweet for McLeod and things couldn’t have worked out better with the Crows also holding on to win against the usually high scoring Cats 15.14 (104) to 8.12 (60).

Registering the biggest hit off the field for the weekend was Port Adelaide coach Mark Williams who called on the AFL to utilise the Indigenous round to raise money for Indigenous health projects.

Williams pointed towards the Victorian bushfire appeal earlier this year as an example of what could be done if the Indigenous round was used as a fundraiser.

“I’m actually thinking now that instead of just having an Indigenous round, we probably should have a big collection for the health of Indigenous young people,” Williams said.

“Maybe this round we collect half a million dollars to be able to donate it each year to Indigenous health and I think that would be a fantastic outcome.

“We saw some of the things they did for the bushfire appeal, I think if we show a leading way with our Aboriginal players all over Australia leading the fight for that, I think it’d be a great thing to hand back to the communities.”

Williams wasn’t the only person offering ideas on how to build on the Indigenous round, and following the Swans win over Port Adelaide, Indigenous duo Adam Goodes and Michael O’Loughlin threw their support behind an all new match featuring the Indigenous All-Stars.

The idea is to play an Indigenous All-Stars match mid-season, possibly during the Indigenous round (All-Star games are traditionally played during the pre-season), and thereby increasing the number of Indigenous players that can be selected for the side.

At the moment both Goodes and O’Loughlin are among those players who miss out due to their clubs pre-season training schedule.

Both agreed that a mid-season match would further highlight the talents of the Indigenous players in AFL.

“It would be fantastic,” Goodes said.

“I know in the middle of the season I would be fit and raring to go to play it. I reckon if you rotated it, and had the All Stars game one year then had the Victoria versus SA Dream Team game [which was held last year] the next, I’m all for that.

“I think the Aboriginal All Star boys love getting together and playing footy together. It’s a super game, and just to be involved in it this year as a coach, it was fantastic to see it first-hand. I’m all for it, and if it’s in a mid-season break, I’d put my hand up to play it for sure.”

“I think all the brothers would jump at that chance if they put a game on mid-season, each and every one of them, they are so proud to play in that All Star game in Darwin.

“As old as I am, it would be great to go out there and put the jumper on. Its one thing I haven’t done in my career, and I really regret not playing in one of those games because of the timing and how I’m always slow to get back. That’s a fantastic idea and maybe something that could be brought up.”