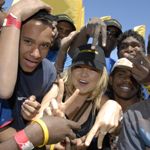 Over 500 students from around Victoria gathered in Mildura this week for Vibe Alive – an exciting new youth festival with a difference!

Vibe Alive is a two day festival for young Australians of all backgrounds that promotes Aboriginal and Torres Strait Islander cultures and encourages tolerance and teamwork. Vibe Alive will be held in five locations in 2008, with the community of Mildura chosen as the only VIC location for the festival’s 2008 program.

“The spirit of Vibe Alive was also well and truly alive among all the young participants at Mildura Vibe,” says Gavin Jones, Vibe Alive executive producer. “We saw some really inspiring examples of sportsmanship.

“We also saw some of the best student performances yet, including ‘The Ronny” who was an absolute scream, and a real crowd favourite.”

The overall winners of the Victorian Vibe Alive Cup were Mildura Titans from Mildura Public School.
The inaugural winner of the Barry Johnson Spirit of Vibe Alive Shield presented by Geoffrey Johnson and Kerrie Hayes was Jamarle Sailor. This shield will travel with the festival to each location and recognise the student at each festival who best displays the spirit of fair play.

The Mildura Vibe Alive festival would not have been possible without the generous support of the following amazing people and organisations: