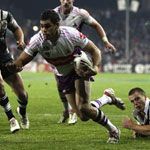 Greg Inglis has become the youngest player in the history of Rugby League Week magazines player poll to be voted best player in rugby league by his peers.

100 players from all NRL clubs voted anonymously in the poll, with Inglis toping the vote count with 22 while last years winner Johnathan Thurston and fellow Indigenous player Scott Prince both finished three votes behind in second place.

The results of the poll followed yet another standout performance by Inglis against the Tigers on Monday night where he scored three tries.

“It’s a real honour to be voted by my peers as the best player in the game,” said Inglis, who has enjoyed another sensational season for club, state and country.

“It’s come as a bit of a shock because there are so many great players in the NRL – Cam Smith, Darren Lockyer, Thurston, the list goes on.

“There are so many brilliant players that it’s quite a humbling experience to be voted the best.

“But I know I’ve really only just started my career in the past few years and I’ve got a long way to go before I reach my full potential.

“I’ve just got to keep working hard on my game to become the best player I can be and help my teammates as much as I can.”